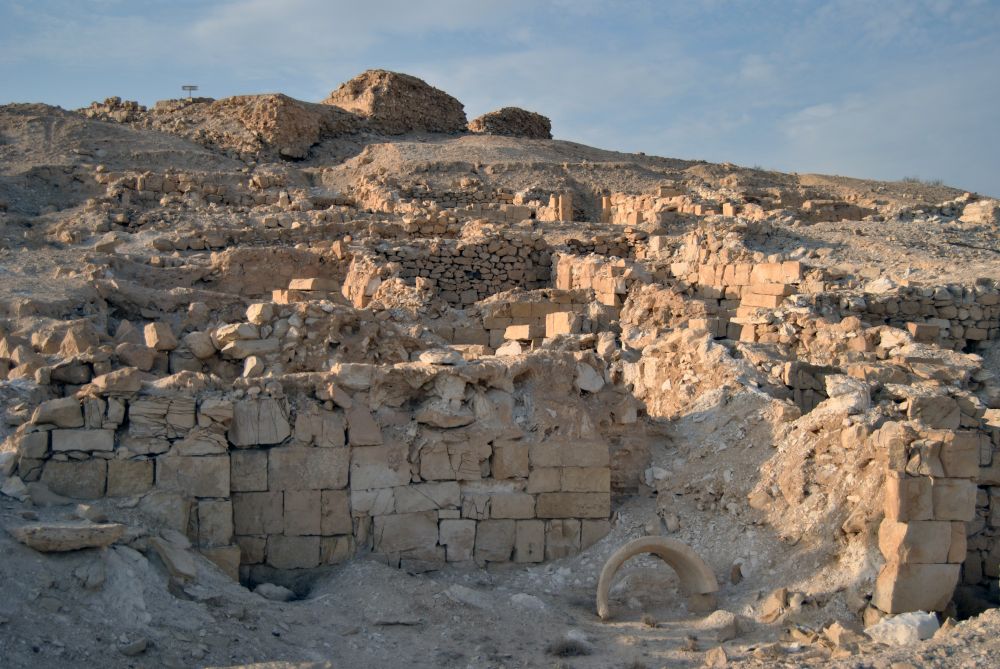 An article in the journal Plos One released on October 14, 2020 is the latest in a series from an international project studying the Byzantine Negev Agricultural Complex, the brief florescence of agriculture in the northern Negev desert of Israel. The article describes changes in the systems over time, and this Background Check spins a tale of animal dung, sheep and goats, and (ironically) water control. The image above is the village of Nessana as it stands today in the Negev Desert, Israel, from the 2020 Plos One article and credited to lead author, Don Butler.


Byzantine / Islamic History in the Near East

The Byzantine Negev Agricultural Complex is a period between the 4th and 7th centuries CE in the northern Negev. The residents of five substantial villages there practiced intensive and sustainable farming in an arid environment, where nutrient-poor local loess soils are generally considered unsuitable for growing crops. Using runoff water and soil conservation systems, supported by the use of herbivore and pigeon manures, the people of the late Byzantine to early Islamic period raised figs, olives, dates, garden peas, cereals, barley, and grapes at a commercial level, feeding travelers and tourists to the newly designated Christian holy sites. The settlement of Elusa (today the city of Halutza) became famous for its wine.

The Negev Desert has been consistently arid or hyper-arid over the past 12,000 years, with mean rainfall rates of between 100–150 mm per year in the north and even less in the central and southern regions. The movement of people into the region is believed to have been the result of population expansion of the Nabataean kingdom during the Byzantine period. The Nabataeans were important traders in the Incense Trade Route (or Incense Road) as well as the Silk Road that passed through Parthia and Asia. Five major settlements flourished in the Negev between the 4th–7th centuries CE: Elusa (also known as Halutza), Subeita (Shivta), Nessana (Nitzana), Avdat (Oboda), and Mamshit (Mampsis). Today the region is in southern Israel but in the fourth century it was in the Byzantine province of Palaestina Tertia and by the 8th century it fell within the Islamic Caliphate.

Water control was especially important to the settled people of the desert who built reservoirs and canals and carefully collected runoff. When runoff water is added to the rainfall, the amount of water in the wadis on an average year in the region can exceed 200–300 mm per year. In addition, approximately 30,000 acres of terraced fields were created in the hinterlands of the settlements, which made this intensity of human occupation possible.

The star of the show is animal dung, a treasured commodity collected from herbivores and birds the world around for a wide variety of uses. Dung is an effective and free fertilizer, a slow-burning and constant fire fuel for cooking and pottery making, construction material for floors and wall plasters, and mortar for roofs. Dung was used at least as long as 12,000 years ago, and on five continents, from the high-elevation zones of South America (llamas and alpacas), the Great Plains of North America (bison), all of Europe and North Africa (cow), parts of South Asia (water buffalo and cow), all of central and northeast Asia, as well as far northern Eurasia (yak and reindeer).

In the Himalayas, people build beds on top of dung-fired stoves to keep them warm at night. In the far north, dung blocks are frozen and used as a mold for frozen fermented milk. Dung is a binding agent for pottery and adobes, and so slow to burn that unlike wood fires, it can allow long-cooking crockpot styles of cooking. And in the northern Negev, it was used to turn the crummy soils into suitable acreages for annual crops.

Archaeologists appreciate dung, in the same way they like garbage dumps (middens) and privies. These types of archaeological features are gold mines because they include evidence of the day-to-day life of people and animals. Dung contains specific information about what an animal consumes, in the shape of seeds, pollen, and opal phytoliths. Dung breaks down fairly easily and converts rapidly into soil—but the created soil retains spherulites, microscopic-sized spherical particles that form in the digestive system of animals, particularly ruminants, allowing archaeologists to recognize soil made from dung. Butler and colleagues used the evidence from the recognized dung in middens to make determinations about the changing use of the commodity over time.

The Negev has never been without people. Pastoralists—people who herded camels and goats—have lived in the Negev for millennia; but the permanent settlement of the villages was unusual for its time. Reasons for the creation of the settlements include the incense trade but also the blossoming tourist trade after the Byzantine emperor Constantine made Christianity his empire's state religion and identified a series of religious sites where pilgrims could visit. Butler and colleagues illustrate how people in those settlements negotiated the arid climate and market demands, adapting and changing when necessary.

For example, the communities in the northern Negev initially relied on goats, but by the 6th century, the farmers had switched to sheep. Sheep require that their owners are at least partly nomadic, so the sheep can be moved around to different pastures, water, and better quality graze, as well as taken to market for dung surpluses. The people of the northern Negev adapted, using dung to sculpt the environment when it was needed, and shifting again when the markets dried up. Eventually, they abandoned their settled life to rely on the intensive exploitation of wild game.

Market and social changes brought about by the end of the Byzantine empire and the beginning of the Islamic empire reduced the demand for large agricultural works. The trade patterns that connected the Arabian Peninsula with the Mediterranean world, and of which the Negev Desert was a significant route, collapsed. The Justinian plague, bubonic plague in the 6th century, altered the demand for exotic goods within the empire. By the 8th century, taxes imposed by the ruling Ummayad (Islamic) government on cultivated land proved untenable.


Separating the Goats from the Sheep

A perennial problem in archaeology has been how to tell the difference between sheep and goats in faunal assemblages. These are two similar herbivores, but they are totally different in the way that they are tended. Goats eat just about anything, and sheep are strictly herbivorous and need to be pastured. But the bones of sheep and goats themselves are hard to distinguish, especially as juveniles. Several non-morphological methods were developed to parse it out, such as stable isotopes to identify diet or analysis on the wear on teeth, but those were always contingent on how the goats or sheep were tended.

In 2010 an objective method of securely separating sheep from goats was defined by Mike Buckley and colleagues: isolating and analyzing a single collagen peptide, allowing for large-scale analyses that is relatively easy, quick and low-cost. It has been relied on ever since, including Butler and colleagues.

Archaeological research in the 4th–7th-century settlements in the Negev teaches us about sustainable agriculture in arid to hyper-arid conditions, something we might well find ourselves in need of in the face of climate change. As such, this is important research. However, in a stupefyingly ironic twist, three weeks before the report on the work of Don Butler and colleagues was published, an article appeared in the Washington Post describing how the Israeli government is working to disrupt the water supplies and farming of Palestineans in the West Bank, north of the ruins of these five settlements. The government is actively destroying Palestinian waterworks, excavating wells for Israeli populations that decrease those for Palestineans, and refusing to provide the farmers with replacements. The irony is by no means subtle.


Correction: an earlier version of this article said the Palestinian water crisis is in Gaza, when it is in the West Bank.