Fish Sauces for the Roman Empire

This painting illustrating the salted fish and garum production process is on display at the Archaeological Museum of Nabeul, Tunisia. Image by M. Rais

Garum was an important fish sauce and condiment of the Roman Empire, one of several fish sauces manufactured and widely traded across the Mediterranean region and beyond. Garum is a salty, slightly fish-flavored condiment, and ancient Roman writers report that garum was used for a whole range of dishes, rather like soy sauce or Worcestershire sauce today. Just to be clear: garum is a Roman fish sauce made from fish and fish guts, while garum masala is an unrelated Indian spice mixture used in curries and lentil dishes.

Garum's key ingredient was glutamic acid a.k.a. mono-sodium glutamate (MSG), and that makes it an "umami" sauce, a basic sauce type celebrated as "deliciousness" throughout the ancient and modern world.

Garum was traditionally made one of two ways, dry-salting or wet-brining. The dry-salting method involved placing small whole fish or the intestines of larger fish into a vat. Herbs, spices, and salt were added to the vat, which was then covered and left for three months to ferment. The wet brine method began with a strong salt solution (or brine) into which was placed whole fish or fish intestines. The brine was heated over a fire until the liquid had reduced to an acceptable level. 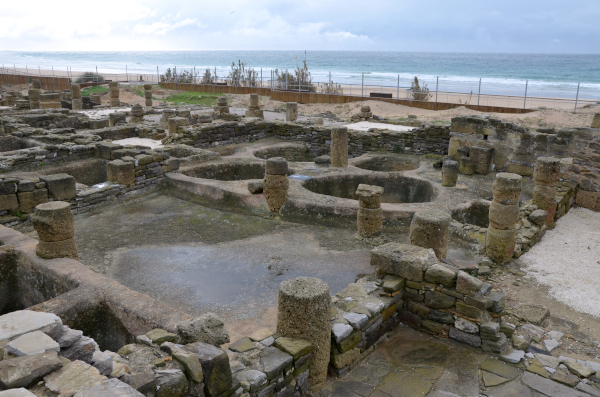 Ruins of salted fish and garum factory at the Roman city of Baelo Claudio, Tarifa, province of Cádiz, in Spain. Carole Raddato

After a smelly fermenting process lasting 3–12 months, a brownish liquid seeps out of the fish. Chemical analysis of garum remains found in processing jars at a Roman manufacturing site revealed a number of free amino acids, the dominant one being MSG. Despite the smell of the rotting process, the resulting condiment is comparable in taste and usage to modern Italian and Asian fish sauces.

The fermenting process allows and assists in the normal organic rotting process of meat, the same kind of process used in plants as well, and creating a variety of foods from cheeses and yogurt, soy sauce and miso, bread and wine, sauerkraut and kimchi, and sausages and hams. Basically, the process is fermenting the flesh to preserve it from putrefying bacteria, and if you get it wrong, you can deliver fish tapeworm (Diphyllobothrium latum) (an intestinal worm) to your customers. Archaeologists tell us that D. latum was widely present among Roman citizens in Austria, Britain, France, Germany, Israel, and Poland.

There are several names for fish sauces in the Roman records—garos, garum, liquamen, allec, muria. All were sauces made from fish of some type, but there is a bit of obfuscation in the ancient literature as to whether they were different sauces or different names for the same basic sauce. The oldest form in use (according to Pliny the Elder's 1st century CE Natural History) was garos, a Greek name for some fish we don't recognize today. The term "garum" was in fashion during the Early Republic, and "liquamen" became popular after the 3rd century CE. Both garum and liquamen appear in Pompeii during the mid-century CE. There's some suggestion (Mouritsen 2017) that the recipes for these fish sauces might have been different: garum might have been made with fish blood (the luxury fish sauce), liquamen with whole fish, muria from tuna, and allec the paste-like dregs.

Despite its foul odor while processing, fish sauce was madly popular as a condiment on Roman tables throughout the empire, especially when mixed with olive oil and served in a cruet-like vessel.


Roman garum manufacturing sites have been identified in numbers around the Roman empire. In the Roman colony of Pompeii, garum manufacturer Aulus Umbricius Scaurus decorated an atrium of his house with a mosaic of four garum containers. A second private residence in Regio 1 of Pompeii is known as the Garum Shop because after the earthquake of 62 CE, it was converted to garum production. The Garum Shop was composed of several rooms organized around the central courtyard used as a processing area. Six large ceramic jars (called dolia) in the courtyard still contained fish bones. The neighbors might have complained.

Other garum production areas have been identified archaeologically in many Roman period sites including Aila (modern Aqaba) in Jordan; at Leptiminus (Lamta) and Neapolis (Nabeul) in Tunisia; Correeiros, Tróia and Setúbal in Portugal; Baelo Claudio in Spain; Cotto in Morocco; as well as many, many other locations.

Various theories about the origins of garum suggest that the earliest form of the sauce was made by Phoenicians or Punic colonists from Asia Minor, perhaps as long ago as the 8th century BCE. One possible source may have been Greeks from the Black Sea region; but from whatever source the stuff came from, it quickly became the go-to condiment to preserve fish and complement poor, cereal-based diets.

Garum was a part of a vast trade network throughout the Mediterranean, along with a wide range of goods and produce, and like olive oil, wine, madder, and honey, garum was traded in large amphorae, jars made for the safe export of liquids. Evidence for the presence of Eastern Mediterranean amphorae before and after the fall of the Roman empire in Europe attest to garum's mighty attractions. Trade reached its peak between the 2nd and 4th centuries CE, but fish sauces continued in popularity right through the Middle Ages and Renaissance and today their direct descendants are anchovies and anchovy paste.


This article began life on the About.com website sometime before November 2010. It is no longer there.
https://www.thoughtco.com/garum-fish-sauce-romans-msg-171114
http://archaeology.about.com/od/gterms/qt/Garum.htm