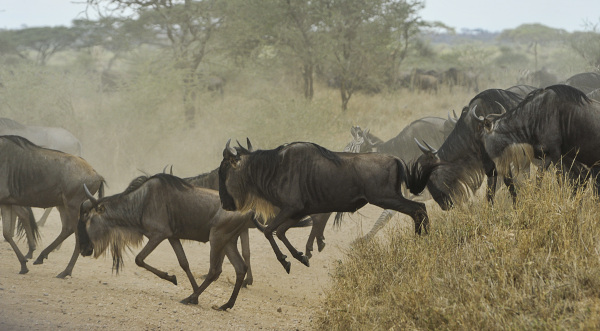 A mass kill is a generic term used to describe a form of communal hunting strategy like a desert kite or buffalo jump, that has the intent of killing dozens if not hundreds of ungulate animals all at once. Mass kills are a form of Traditional Ecological Knowledge that was practiced in different variations all over the world, beginning at least as long ago as the Upper Paleolithic period of 25,000 to 30,000 years ago. The practice of mass killing (termed as "overkill") is one of several, and probably the least convincing, of the explanations given for the Late Pleistocene megafaunal extinctions.

Mass kill strategies were used only rarely, probably because our ancient hunter-gatherer relatives knew that to kill more animals than you could reasonably store for future consumption was wasteful.

Mass hunting is a collaborative technique, which at its most basic form requires a specific environment: a large flat tableland fringed by ravines, where migrating animals cross on a predictable cycle. Communal hunting was practiced in tundra, grassland, alpine and desert regions of the world. Mass kills involve the creation of drive structures as well as an understanding of animal behavior and an elevated level of human cooperation. As such it is evidence of modern human behaviors.

The advantages of such cooperative efforts are fairly clear. Expending the energy to build a trap in the right place would have been insurance, providing (if for only once or twice a year) a predictable and massive source of meat, hides, and bone which could be stored for future use.

Animals in a Mass Kill

How to Kill Dozens of Animals at Once

The method used in mass kills is similar across the globe: a hunter-gatherer society constructed traps, corrals or blinds along the known paths of migrating animals or simply took advantage of the local topography, box canyons, narrow gorges or steep cliffs. When the animals passed by during their seasonal migration, the group worked together to drive the herds into the corrals or pits or off cliffs where the animals would be killed and harvested for their meat, hide, and other raw materials.

The oldest (putative) mass kill known so far is at La Cotte de St. Brelade, a coastal Neanderthal site on the isle of Jersey in France, where massive piles of mammoth bones were interpreted as the results of Neanderthals herding the extinct elephants off a cliff. Scott and colleagues (2014) have disputed this interpretation based on a detailed study of the evidence. On Tanegashima Island in Japan, hunter-gatherers excavated rows of pits at least 30,000 years ago. These trap-pits were arranged in long lines alone a flat terrace, and the herds of animals (wild boar and deer) were driven across it (Sato 2012). Another early example is the Upper Paleolithic site of Solutré in France, where a massive quantity of horse bones was identified and interpreted as a mass kill (Olsen 1989). Desert kites and buffalo jumps were permanent structures built to help groups of people purposefully herd a large group of animals into pits, enclosures, or off steep cliff edges, which begin as early as the PrePottery Neolithic period in southwest Asia between the 9th-11th centuries BCE, and the Archaic period in the Americas at roughly the same time.


''Note: This article was originally published on About.com on or before March 8, 2014 as
http://archaeology.about.com/od/sitetypes/fl/Mass-Kills.htm
but has been removed from that site. I really don't remember when I first wrote it.
https://web.archive.org/web/20140308213219/http://archaeology.about.com/od/sitetypes/fl/Mass-Kills.htm