It will be a cool muddy spring day on March 4, 2031, when the woman will bring her father into the Jiffy Kleen Tinker Clinic ("Seances, Sweat Lodge, and Cataract Services with Compassion") on the outskirts of an unnamed town in rural Iowa. She will retain the remnants of a cool, upper-class beauty, but it will be clear to any observer that she has fallen on hard times. She will wear anonymous jeans and a wrinkled Iowa Hawkeyes sweatshirt. 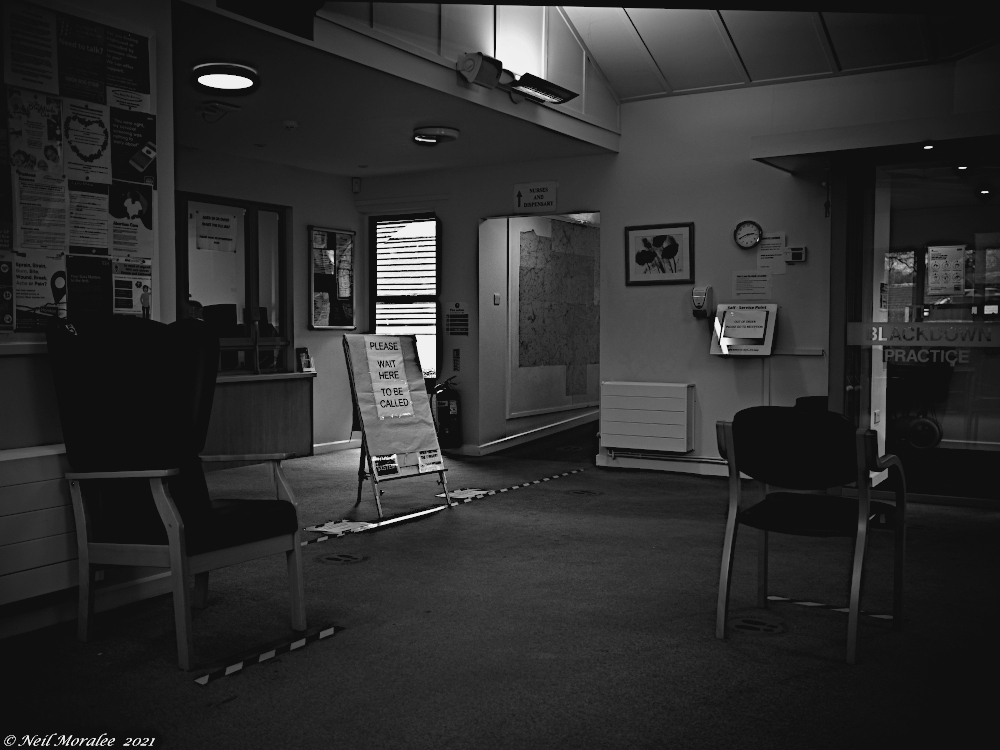 She will pull her car, a nondescript white 2027 Toyota Now! sedan, into a parking space at the clinic. She will get out of her car, connect the car's battery to the pole at the center of the space, and feed the meter in copious quarters. There will be no other cars in the lot. She will walk to the car's trunk, take out a walker frame, and bring it to the passenger side.

"We're here, Dad," she'll say to the ancient man in the front passenger side, who will peer at her through the window and slowly, painfully push his body off the seat, aided by his daughter. "Will we be here long? You know I have things to do, people to see," the old man will demand dyspeptically, and she will respond, "About an hour, maybe."

The woman will help the man align himself with the walker and then direct him with a series of nudges and pokes toward the clinic's glass door. It will be covered with bright stickers, and when the door opens to a push, a tinkly musical note will play. In the waiting area will be four people, an enormous man holding the hand of a very small girl and a couple who sit two chairs apart.

The woman will settle her father on a leatherette couch and kiss his forehead. "I'll be right back," she will whisper, then step to speak to the receptionist. "Where are you going?" the old man will cry but receive no answer. The receptionist will be a teenage girl in a smock and a pantsuit, with tangled brown hair, wearing a name tag marked Krissy. Krissy will stop sharpening her nails, pop off her stool, and come to the window to check the woman and her father in. She will hand the woman an electric form to fill out, which the woman will take back to her seat.

The woman will lie on the form, as she has lied in the past. Her name is Marina; her father is Harold—neither of those names is what they were assigned at birth. Her father suffers from dementia and has been clinically identified as a narcissist, level 11; she will list him at level 4. He will have been expelled from six family care facilities over the last year; she will only list two. She is interested in easing his last few years, she will write, but she is mainly interested in making him stop, just stop. The form will be duly signed and submitted to the receptionist. She and her father, aided by the walker, will follow the receptionist back to the fifth room on the left.

The room will be small and decorated as if it were a late 1890s sitting room, with large overstuffed furniture and a stained glass window hiding a view overlooking the parking area. The therapist will enter the room. She is Karen Mazurski, a woman in her forties, and she will be clothed in a long printed cloth dress, hung about with many beads and bangles. Karen will greet the woman and the old man, whom she has met at the local senior living community Shady Acres. She will be followed into the room by a nongendered person in a white coat, whose name tag will read Dr. Ken.

The therapist will gently probe the woman to describe the issue, but with her father in the room, the discussion will not go well. "I'm as sharp as I ever was!" the old man will interrupt, "Don't you talk that way about me! Sneaky, stupid woman!" and the therapist will come and sit next to him and hold his hand. "Perhaps it would be best for you and me to talk privately while Marina returns to the waiting room. Dr. Ken, could you show her the way?"

Ken and Marina will step into the next room, a conference room with a flip chart. Ken will not mince words. "I understand that your father has advanced narcissism and that his condition is making it more and more difficult for him to get along with others."

"My father," she will confess, "was an important figure once, rich, famous, and handsome as a younger man. He is none of those things now: we have spent several fortunes attempting to help him attain some unattainable goals."

And, "Yes," Marina will confess. "We are at our wits' ends. He has been ejected from the assisted living facility here in town, and your clinic was recommended as a last resort."

Ken will nod. "Yes, Shady Acres has made great strides with narcissists, but I must say that in the most extreme cases, their treatments do work best with our clinical assistance."

"That's what I was told, that if we wanted him to stay at Shady Acres, he would have to undergo a procedure here. They mentioned a complete reset of his default, um, network?"

"We believe," the doctor will say, "that your father's ego is getting in the way of the happiness of the people around him, and that is why Shady Acres and other nursing homes will not—indeed can not—keep him. I understand that none of your family can take care of him?"

"No!" Marina will shout, but she will then force herself to calm down. "No, none of us have the wherewithal to take care of him. None of his ex-wives can bear being in his orbit, and my brothers and sisters and I have spent so much of our inheritances to his various causes that none of us can afford to take him on board." Another lie; his children simply cannot abide him either.

"We believe," Dr. Ken will say, "that one possible avenue of resolving this situation is a complete reset of his main ego. He needs to understand his place in the universe and forget much of his past position of power. We don't normally allow politicians to forget their pasts, you know, but there are special circumstances, such as when a person is deluded enough to think he's still the king. Or any king for that matter. But the court order from the judge assigned to Shady Acres requests that the following be selectively removed: sexist, racist defaults, the past histories and memories of his childhood and family especially his parents, and, of course, his time in office. We feel the TV appearances are negligible at this point."

As an aside, Dr. Ken will add, "We used to call this tool the Total Perspective Vortex, but it turns out that's copyrighted, so we simply call it the TPV. To be sure, there is the final resort of euthanasia, but of course, first, we must try all possible relevant options."

The doctor will open a graph of the human brain and point at it. "Over the past few years," Dr. Ken will elaborate, "scientists have identified the bed of the ego. It is a network of several distributed regions of the brain that is activated when the person is awake and remembering the past, envisioning the future, or making social inferences. These tasks include autobiographical remembering, episodic retrieval, and mentation about another's thoughts and beliefs. Our techniques don't require surgery, but instead use electromagnetic pulses to tinker with the way memories are stored; we have several years of successes with extreme narcissists."

"In layman's terms, what the procedure will do is reset your father's main ego. The problems he suffers from arise from his inability to see himself as other than the center of the universe. The TPV will do that for us."

"I don't think we have any choice," Marina will say.

And Dr. Ken will say, "We can do the procedure today, in the office. It will take about 15 minutes."

Marina will nod, gratefully; the old man will be sedated and taken into a consultation room, Marina will sit in the waiting room, and fifteen minutes later, the woman and all her family, as well as the universe at large, will heave a huge, deeply felt sigh of release.