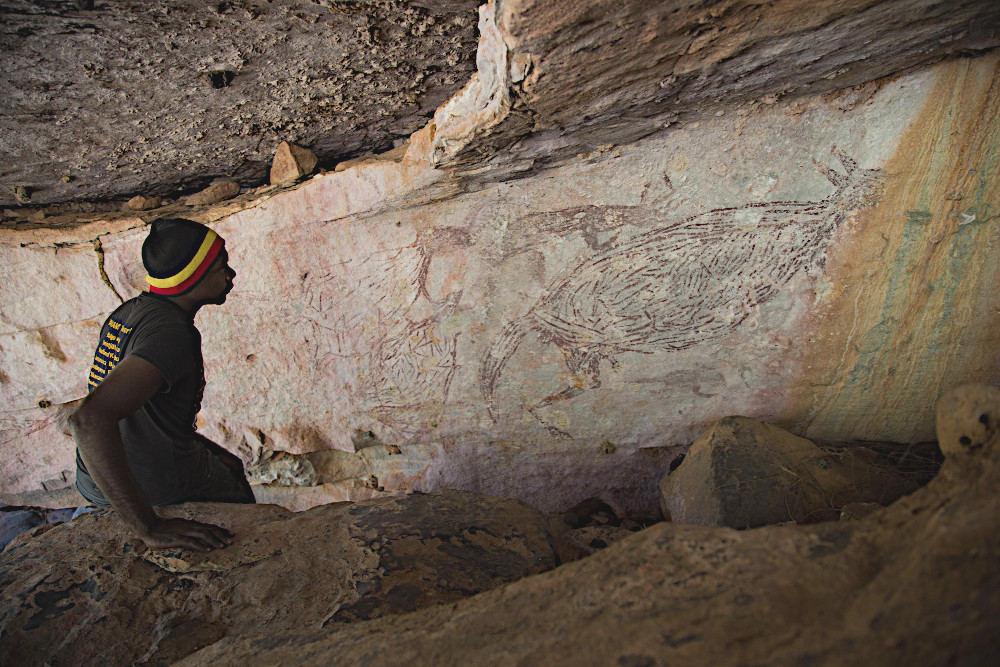 The kangaroo motif in the image above is a small portion of a rock art panel in the Kimberley region of the Northern Territory of Australia and it was painted by indigenous people. In an article published in Nature Human Behavior on February 22, 2021, archaeologist Damien Finch and colleagues propose that the kangaroo and 15 other paintings of the style known as Irregular Infill Animal Period (IIAP) were painted between 17,200–13,100 calendar years ago (cal BP), based on radiocarbon dates from fossilized mud wasp nests on top of and beneath the images. The upshot of the work is the first time description of the use dates of the IIAP in the region.

This Background Check delves into community-based collaborations, mud wasp nests, styles in rock art, and the overall difficulty of dating ancient paintings. In the photo above, Traditional Owner Ian Waina contemplates a panel of paintings from the earliest period of painted rock art in the Kimberley, a remote region in the far north of Western Australia. Radiocarbon dating on four mud wasp nests overlying the featured kangaroo motif establishes that this painting is more than 12,700 years old. Photo credit: Peter Veth and the Balanggarra Aboriginal Corporation. Illustration: Pauline Heaney.

What is Rock Art?

The kangaroo motif is an ancient feature generally classified by archaeologists as rock art, a category that includes abstract, naturalistic, and other images painted on and/or pecked or incised into stone slabs inside or outside rock shelters and caves. Art is the traditional word for such elements around the world, but the word doesn't represent the complexity of purposes. Most of the time, archaeologists don't have a clue about what the purpose of drawings might have been, which is one of the reasons that collaborative community-based studies are critical. Perhaps the most appropriate reason for such art is "story-telling."

The north coast of Australia, including the adjacent Kimberly and Arnhem Land regions, contains extensive examples of painted rock art in Australia and is home to the stunning Nawarla Gabarnmang rockshelter, Australia's 25,000-year-old Sistine Chapel.

Rock art is irritatingly difficult to date. Archaeologists use three main methods to determine the age of a particular piece of work: direct dating (chemical analysis of the drawing itself), indirect dating (chemical analysis of associated deposits assumed to have been laid down at the same time as the drawings), and stylistic dating (comparing the images to others of a known date).

However, while European rock art is thousands of years separated from its makers, Australian rock art is a living creative force. Ancient painters and their descendants revisited, maintained, curated, and retouched the images over decades, centuries, even millennia in some cases. That complexity makes it difficult to establish firm starting and ending dates of a given motif, although in Australia (as in the Americas, e.g. Gottschall) it is also exciting in that the painter's descendants may well know what the depicted stories tell.

Archaeologists have used stylistic dating to classify ancient rock art for well over a century. This technique involves an art history method of comparing various examples within a region and classifying them according to stylistic specifics. Those specifics can be a wide range of things: pigment type and color, how open spaces are filled in, abstract versus naturalistic subjects. By looking at multiple instances and noting which style overlies another, the archaeologist can figure out the relative dates, that is, which style came first. But stylistic dating is a relative method only—it doesn't tell you the absolute dates of anything.

The motifs of the Finch study belong to the Irregular Infill Animal Period (IIAP), a naturalistic method considered one of the earliest types of rock painting in the region. Kimberley's naturalistic motifs share stylistic characteristics with naturalistic animal motifs elsewhere in the world—pigment color, anatomical detail, and near-life size drawings with patchy infills are common to ancient rock art from Europe, Asia, Africa, and the Americas of ages ranging in time from 44,000 to 5,000 years ago. Even so, styles are specific to regions, and that's a huge topic best illuminated by Rock Art Australia. 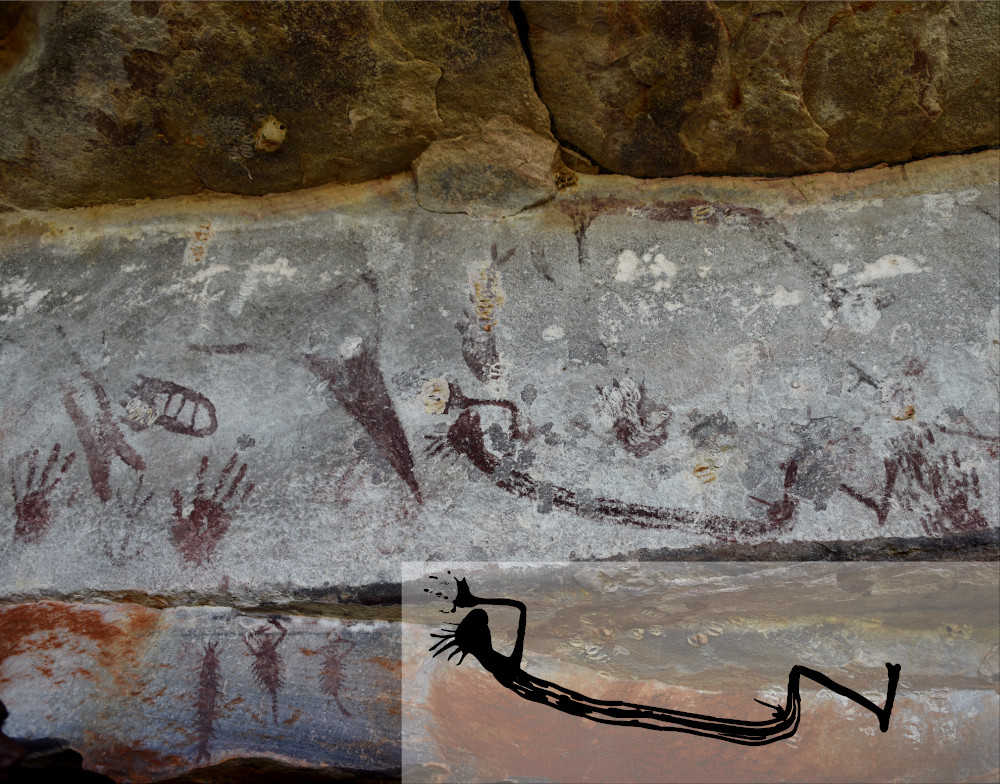 Caption: Rare depiction of a human figure from the oldest style of painting in the Kimberley. The inset shows the figure which has a wasp nest over the fingers at the top left. From the age of the wasp nest, we know this painting is more than 9,000 years old. Credit: Pauline Heaney and Damien Finch

Finch and associates investigated the kangaroo and other IIAP paintings using mud wasp nests as a type of indirect dating. In the image above and the one of the kangaroo at the top of this story, one can see several small yellow-orangish patches—those are fossilized wasp nests.

Wasp nests were and are created by several species of mud dauber wasps in Australia that build their nests from mud. The wasps collect material from the surrounding landscape as far away as 25–200 meters (82–560 feet). Materials incorporated by the wasps into their nests include pollen and other organic material, but also sand-sized grains of quartz and feldspar from the surface of the rock on which the nests are constructed.

Those wasp nests are today found both on top of and underneath rock art motifs. The first successful dates on rock paintings using wasp nests were published in 1997 by geochronologist Richard G. ("Bert") Roberts and colleagues, who used radiocarbon dates on organic materials within the nests and optically stimulated luminescence (OSL) dates on the quartz grains.

In 2020, Finch and colleagues published an article detailing their methodology in the open-source journal Science Advances that provides additional detail and relevant pictures to the methodology.

How Old is the Kangaroo, Then?

Finch and colleagues investigated 75 wasp nests either under or over pigments from the northeast Kimberley rock art motifs. They argue that 15 IIAS motifs including the kangaroo were painted between 13,100 and 17,200 cal BP.

Australia was first colonized about 65,000 years ago. The oldest figurative rock art in the world is from the Leang Bulu’ Sipong 4 site in Sulawesi, 2,000 km north of Australia and dated about 40,000 BP. And the earliest, generally accepted (but less direct) Australian date for rock art was obtained from a recently excavated slab with an indeterminate black pigment motif recovered at Nawarla Gabarnmang in Arnhem Land dated to 26,913–28,348 cal BP, so it is quite likely that additional research may broaden the time scale.

Since the 1980s, much rock art research in Australia has been conducted with the participation of the Aboriginal people who own and have owned the properties for millennia. Since then, an increasing number of projects use an interactive community-based approach, a collaboration between professional archaeologists with non-professional Australian Indigenous people, known as "Traditional Owners." Traditional Owners are custodians with authority for cultural heritage within their estates, not simply stakeholders in cultural heritage projects. As such, they fully participate in research aims, methodology, and management of information.

The collaborative process is known as "working alongside," and it explicitly recognizes that products, processes, and outcomes must be negotiated through shared decision-making. One significant step that the Traditional Owners provide is a process known as "grasping together," in which an individual encounters a site, and then begins to put together the pieces of a story or interpretation drawn from their existing knowledge, memory, and experience.

Ongoing "happenings" of interpretation are dependent on context and setting, including and perhaps especially, who is listening to the story: researchers, field schools, family. The stories may never reach the wider scientific world, but they are a source of meaningful interaction between scientific and indigenous communities and teach new archaeology students the value of such cooperative efforts.

Like other community-based archaeological projects around the world, those in Australia are ethical attempts to negotiate a workable combination of heritage research and social justice.