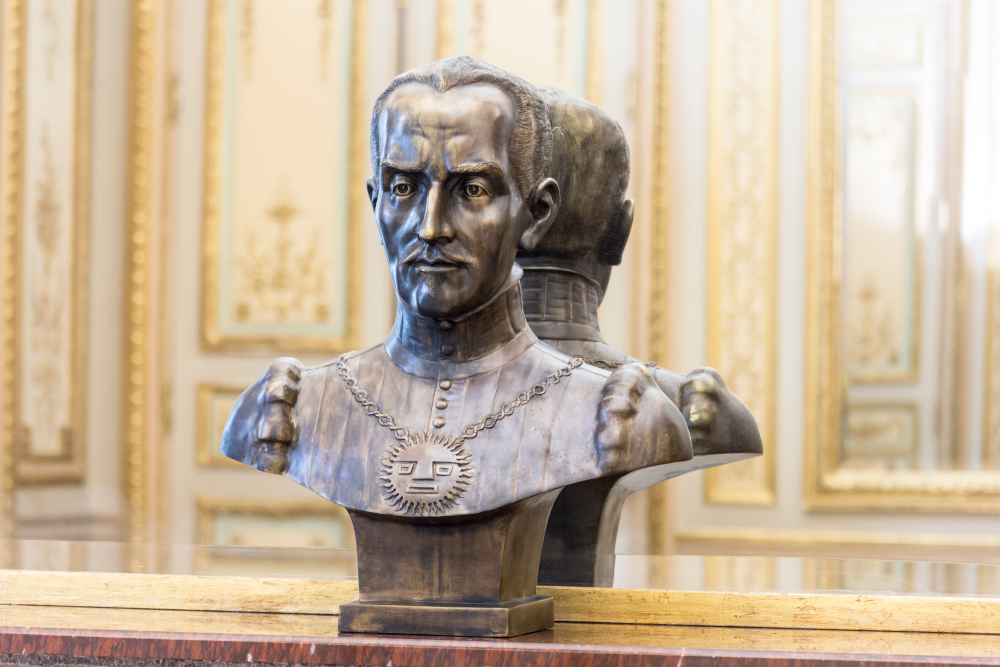 The Inca Garcilaso de la Vega (April 12, 1539–April 23, 1616) was the son of an Inca princess and a Spanish conquistador also of royal descent. He was a Renaissance man in the true sense of the word: a 16th-century historian, ethnographer, linguist, translator, political thinker, and philosopher, and he was a unique eyewitness to the perils of conquest.

The Inca Garcilaso was the first person of indigenous descent to publish books about the New World in the Old, and America's first Neoplatonic philosopher. His contemplations on the errors of Inca and Spanish rulers during and after the conquest recommended a post-colonial strategy so dangerous that 165 years after his death, the Spanish banned his books in the indigenous communities in Peru. The image above is a bust of Inca Garcilaso de Vega in the 19th century Palacio de Linares, the Centro Residencial Marqueses de Linares, now the home of the institute la Casa de America in Linares, Jaén, Spain. Photo credit: CAS, licensed under CC BY-NC-ND 2.0. 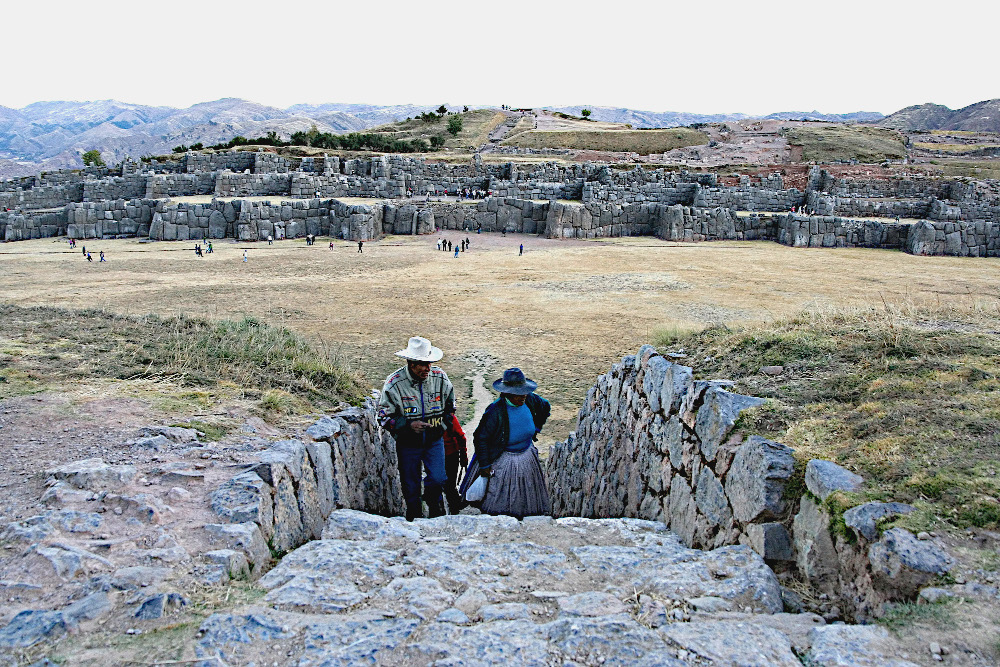 Christened Gómez Suárez de Figueroa, the Inca Garcilaso was the son of two noble families in Cusco. His mother Palla Chimpu Occlo or Nusta Isabela Suarez Chimpu Occlo (d. ~1572), was a member of the Inca royal family, granddaughter of the Inca emperor Topa Inca Yupanqui (1471–1493), niece of the 12th Inca Huayna Capac (1493–1527), and cousin to the brothers Atahualpa and Huascar, whose fierce family battle ended the Inca Empire. Gómez Suárez's father, Sebastian Garcilaso de la Vega y Vargas (ca 1500–1559), was descended from two of the legendary knights and noblemen of the Moorish battles in Spain. A member of Pedro de Alvarado's failed conquest to Peru (Francisco Pizarro beat him to it), Sebastian arrived in Peru in 1532 and joined Pizarro's conquest force.

Although his parents did not marry—his mother was one of two concubines of Sebastian—Gómez Suárez did have free access to the households of both parents. Skirmishes between the Spanish and their mutinous Incan subjects interrupted his parent's attempts to get him formally educated. Gómez Suárez's first language was Quechua, but he was likely bilingual at a young age and had direct access to oral histories from relatives in his mother's lineage. By his teens, Gómez Suárez was his father's scribe, handling correspondence to Spain and reading knotted string quipu records to collect tribute from the Peruvian citizens for the Spanish crown.

As a young man, Gómez Suárez traveled widely within the remains of the vast Inca empire, observing practices and festivals of both Inca and non-Inca indigenous peoples. His father died in May 1559 and left him 4,000 pesos in gold and silver so he could travel to Spain and finish his education. Increasing prejudice against indigenous and mestizo people made it unlikely that Gómez Suárez could advance in Peru, and at the age of 20, he left Cusco for the royal court of Spain.

In Spain Gómez Suárez's dual heritage wedged him between the Incan nobility and the Spanish literary world. After being rejected by his Figueroa relatives, Gómez Suárez settled in Montilla, where he was welcomed onto the estate of his uncle Don Alonso de Vargas, where he worked in his uncle's vineyards and raised horses. Three years after he arrived in Spain, by 1563, Gómez Suárez had transformed himself into Garcilaso de la Vega, a poet soldier, replacing his Figueroa name and adopting a coat of arms that reflected both Incan and Spanish worlds. He never returned to Peru, although in 1563 he traveled to Madrid to apply for permission to return. 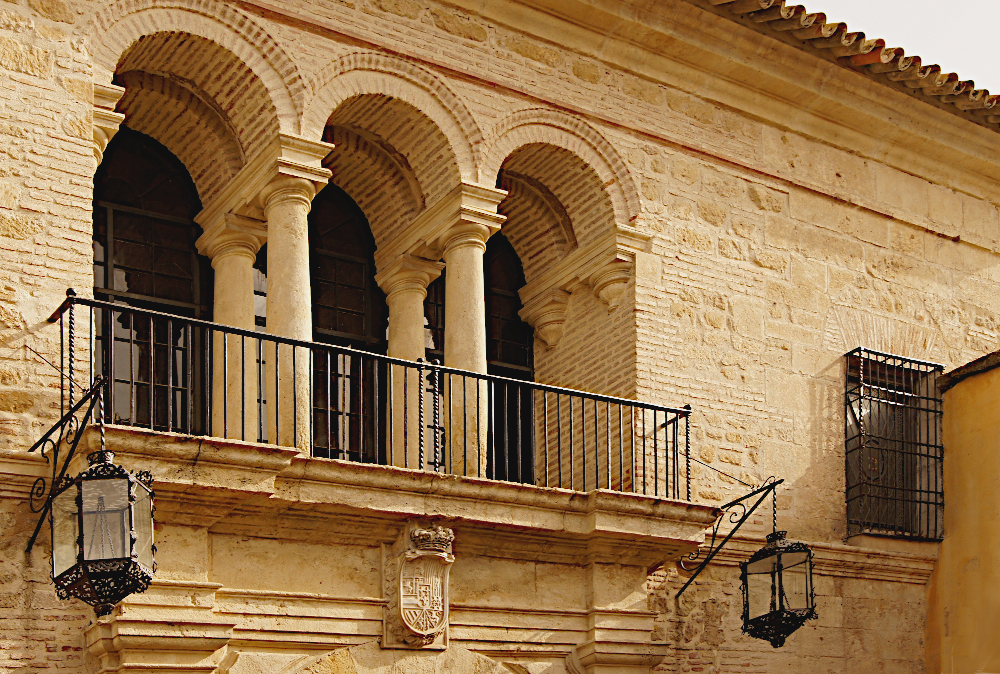 The Royal Stables of Córdoba, built in 1570 by decree of King Philip II, where the so-called Andalusian horse was bred. Image credit: Jebulon

While in Madrid arranging for the paperwork, Garcilaso met Bartolomé de las Casas, a Spanish friar famous for his work in Peru documenting the Inca culture. The meeting didn't go well: las Casas was not happy to be meeting an educated Inca. But Garcilaso also met Gonzalo Silvestre, a Peruvian expatriate who had been a captain in Hernando de Soto's expedition to North America (1539–1543). They became lifelong friends, with Silvestre providing the inspiration and background for Garcilaso's book, La Florida (published in 1609).

In 1564, Garcilaso went to Seville to perfect his Latin. There he chanced upon "Dialogues of Love" ("Dialoghi d'Amore"), an Italian poem by Leon Hebreo. Hebreo was the penname of Judah Leon Abravanel (1464–1530), a Neoplatonic philosopher and exiled Portuguese Jew who lived in Italy. Abravanel's poem of a long courtship between a lover and his reluctant mistress was an attempt to reconcile competing philosophies of Plato and Aristotle, competing teachings of Moses and Maimonides, and competing theological commentaries of Aquinas and Averroes. Much later, in 1590, Garcilaso would publish a Spanish translation of the poem: but it is clear that the man from two worlds early embraced Abravanel's principle of philosophical reconciliation.

In 1570, Garcilaso was made a captain and served for a month in the Spanish army. At the same time, upheaval in Peru reached a breaking point when the last Inca was publicly beheaded in the plaza at Cuzco, and the current Spanish ruler of Peru Francisco de Toledo claimed that the Inca had never been kings but were murderous thugs who ruled an ocean of timid simpletons.

By 1590, the Inca Garcilaso had inherited the estate of his uncle. He sold it, and moved to Cordoba, and published his first book—the translation into Spanish of Dialogues of Love.

His next project was the history of Hernando de Soto's 1539–1543 expedition to the North American Continent, "La Florida," which made it through the Inquisition censors in 1605. The text was based on interviews with his friend Gonzalo Silvestre and accounts written by expedition members Juan Coles and Alonso de Carmona. A blend of historical fact and fiction, La Florida is an epic adventure modeled on the chivalric novels of the day.

The Inca Garcilaso also began work on the two-part Royal Commentaries of the Inca, a vision of the Inca empire as he knew it as a boy. Part I, published in 1609, details what his relatives told him of the Inca past; and Part 2, published in 1617 after his death, describes the Incan civil wars.

The Inca Garcilaso never married, but he likely had associations with female slaves and servants. He had at least two sons, the younger of whom was Diego de Vargas, who worked as a scribe on Royal Commentaries.

The writer James Feurst describes Garcilaso's most dangerous work as the Royal Commentaries, which outlines a potential shared and dual rule of postconquest Peru. Garcilaso proposed a pragmatic approach to the aftermath of conquest, a political situation in which conquered and conquerors would share power and find accommodation in order to go forward. It was that point that attracted the English philosopher John Locke (1632–1704), who folded that idea into his "state of nature" argument.

In 1781, the royal court of Spain banned the Royal Commentaries from the Peruvian civilians because it was used to support the ongoing rebellion in Peru. 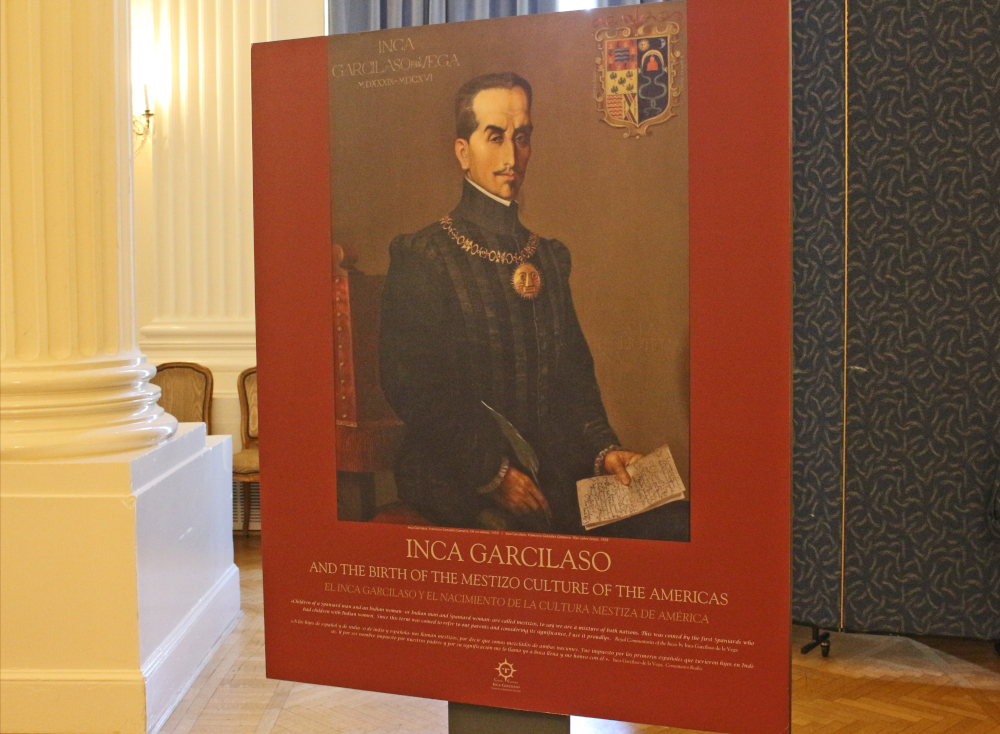 In his books, the Inca Garcilaso argued for political reconciliation and social justice in Peru and across the Americas. He encouraged Europeans to meet the indigenous peoples on the same level, and indigenous peoples to preserve their language and traditions by appropriating Christianity, literacy, and writing.

His works were what literature and language professor Sara Castro-Klaren calls "double-stranded," interweaving both Hispano-European and Inca-Andean cultural codes. He supported the uprisings but remained critical of both Incan and Spanish governments, preferring instead a melding of the two in a post-colonial world.

The 400th anniversary of the death of Inca Garcilaso in 2016 was overshadowed by that of Cervantes and Shakespeare, but it still was celebrated in many quarters, leading to new books and articles in a renewed consideration of his philosophical underpinnings and impact in literature and philosophy.


A version of this article was published on About.com in September 2012 and was taken down after March 16, 2016. It has been substantially changed for Wasteflake.