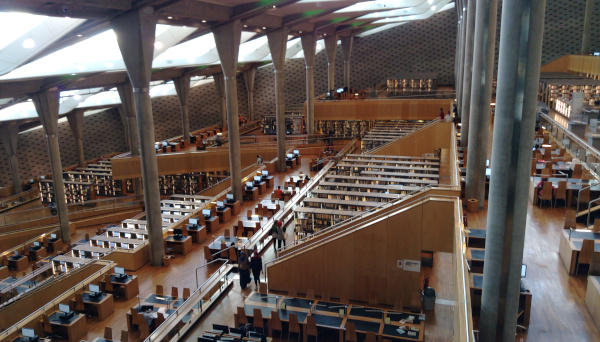 The Library of Alexandria (also known as Bibliotheca Alexandrina in Greek) is the element of the ancient Egyptian city that is most widely known, that astronomer and public scientist Carl Sagan wistfully described as one of the "great intellectual achievements of antiquity... (that) never captured the imagination of the multitude." It was Alexander the Great's most scholarly and inherently imperial idea: a collection of the world's science and literature translated from their original languages to Greek, and it was begun in the 4th or 3rd century BCE and remained in use at least until the 7th century CE. The image above is of the interior of Egypt's modern Bibliotheca Alexandrina, completed in 2002 with shelf space for eight million texts. Photo credit: Azniv Stepanian.

The notion of a world library was said to have been dreamed up by Alexander the Great himself, but he wasn't the first. Libraries had been in existence for over a thousand years, albeit established for the use of the rulers. The earliest was cuneiform tablets at Ebla in Syria, established about 2400 BCE. The Library of Ashurbanipal was begun at Nineveh in Iraq about 680 BCE and it contained some 30,000 cuneiform documents, some of which were much older literary and religious manuscripts. The earliest known stone library building was that of Pharaoh Ramses II (ca 1303–1213 BCE), where the inscription over the door read "the house of healing for the soul."

Alexander planned that his new city on the Nile Delta should include a large, extensive library: librarians would be sent out to gather the written works of the various nations he had and would conquer, make new copies and translate those works into Greek, and make them available for scholarly research.

Alexander died in 321 BCE before his library was begun. The founding pharaoh of the Ptolemaic dynasties of Egypt Ptolemy I Soter (r. 305–282 BCE) was one of Alexander's generals, and it is likely he or his son Ptolemy II Philadelphos (r. 284–246 BCE) who founded the library. By the time of Ptolemy III ("Euergetes", ruled 246–221 BCE), a second "daughter" library was housed in the building called the Serapeum; and there were other smaller book collections throughout Alexandria. Scrolls kept at the Serapeum were said to have contained literary documents for general use, rather than the more scholarly documents held for study at the main repository.

At its peak, the various repositories are said to have held an estimated 40,000, or 400,000, or 700,000, or even 900,000 scrolls—estimates vary widely among the ancient sources. Prominent among the documents gathered for the collection were some of the private holdings of Aristotle, and, by some reports, a translation of the Hebrew Bible into Koine Greek (known as the Septuagint), which may have been translated there. The number of documents in the library seems inflated to modern scholars: in particular, Roger Bagnall, writing in 2002, suggested that the sources were aware that the collection was enormous but had no real idea how many documents were there.

Some of the men associated with the collection of the documents are Alexandros of Aetolia, Lykophron of Chalkis, Zenodotos of Epheso (the first director of the library), and Demetrios of Phalero, and most of the early book acquisition is thought to have taken place before the 3rd century CE. A catalog of the materials (called Pinakes) was made by the director Callimachus (310/305–240 BCE) between 260 and 240 BCE, although the document is now lost.

Buildings of the Library 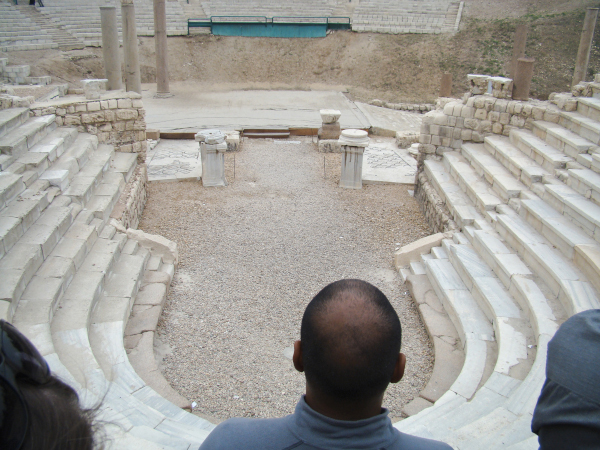 The marble odeon or amphitheater of ancient Alexandria, founded in the 4th century CE and rebuilt in the 6th century. Photo credit: Iris Fernandez. CC BY 2.0

Alexander's "library" was more like a university campus than what we think of as a library. There were separate buildings for storing the scrolls, as well as classrooms, lecture halls, and study areas, and homes for the scholarly community. Although modern construction and water level rises within Alexandria have all but erased the various buildings, archaeologists have managed to identify the ruins of some of these structures, at the site known as Kom el-Dikka.

One central focus was the Mouseion Academy, an enormous set of buildings accounting for up to a third of the city center, and officially part of the palace complex of the Ptolemaic dynasty of Egypt. Sometimes called the Museum, the Mouseion (which means something like "institute of the Muses" and was dedicated to the nine Greek muses) contained some of the scrolls of the library and acted as a cultural center, combining both religious and intellectual pursuits.

Life at the Alexandrian Academy

The academy offered resident scholars free board, lodging, servants, tax exemptions, and salaries. Among the scholars and writers enticed to Alexandria was the geographer Strabo, the playwright Aristophanes, the physician Herophilus, the philosopher Philo, and the mathematicians Euclid and Archimedes.

Many Greek scholars would have been drawn to Alexandria itself, a Greek colony located at the mouth of the Nile River, which was home to the ancient civilization that had built the Great Pyramids. For example, the Greek philosopher Philo of Alexandria (ca. 15 BCE–50 CE) dove deeply into an inventive investigation into world philosophy. At Alexandria's library, he compared Greek, Persian, and Indian religious manuscripts and compiled what he considered the core beliefs of just and good peoples throughout the known world.

The End of the Library

The destruction of the library seems to have been a combination of numerous accidental and purposeful burnings and neglect. Active battles damaging the buildings were undertaken by the Roman emperor Julius Caesar in 48 BCE and by three 3rd century CE Roman emperors (Caracalla, Aurelian, and Diocletian). Christians and anti-Muslim propaganda claim that the Arab caliph Omar set fire to the library in 642 CE, while anti-Christians claim that a mob of monks destroyed the buildings in 391. Bagnall suggests that in the end, the papyrus themselves would not have survived the Mediterranean climate, and without continuous replacement, the books would have rotted on the shelves.

The library functioned like a university for at least six or seven centuries. But, as Sagan wrote in Cosmos, "The great intellectual achievements of antiquity had few immediate practical applications. Science never captured the imagination of the multitude. There was no counterbalance to stagnation, to pessimism, to the most abject surrenders to mysticism. When, at long last, the mob came to burn the Library down, there was nobody to stop them." 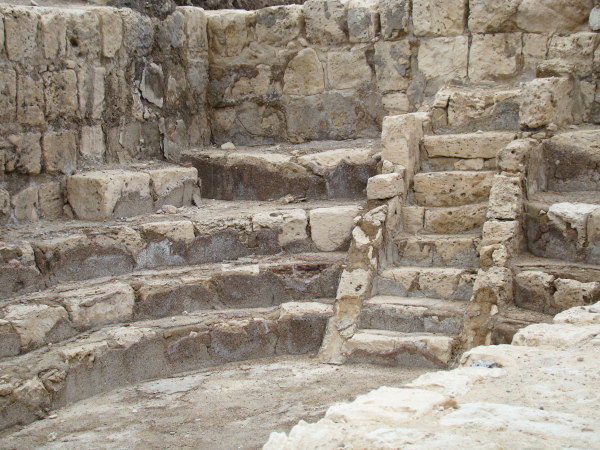 The archaeological site of Kom el-Dikka, which means "hill that contains benches" in Arabic, is also known as Kom Aldakka ("hill resulting from an accumulation of rubble and sand") and Kom Al-Domas ("hill of dead bodies"). The site includes a complex of about 20 small auditoriums with stone benches for seating on three sides and a teacher's seat at the head. These probably represent the classrooms of the "University of Alexandria" era, begun in late antiquity, and taking final shape in the late 6th, early 7th centuries CE.

Kom el-Dikka also had baths, Early Roman villas, and a theater. The villas include five richly decorated houses with pseudo-peristyle courtyard plans and elaborate dining areas. The best preserved of these is called the Villa of the Birds, named for the birds included in an elaborate mosaic floor. These buildings may or may not have some direct association with the library.

Although it is certain that there was a library or libraries in Alexandria, there are several points of contention that cannot be resolved by archaeological research or historical research: the precise foundation of the library, how many documents were in its repository, and what caused its eventual destruction. Historical records on these topics are either missing or confusing and contradictory or patently political propaganda.

Perhaps somewhat strangely, there are no contemporary accounts of the founding of the Library at Alexandria and few reports of its use. Strabo spent four years in Alexandria and described the Mouseion as "a public walk and a place furnished with seats, and a large hall, in which the men of learning, who belong to the Museum, take their common meal." But he never mentioned visiting the library, although he reports it was destroyed by Caesar. Neither did Plutarch mention visiting the library when he lived there in the late first century CE, nor did the Graeco-Roman writer Appian who lived in the city in the 150s.

If there's a moral to the story, and we all love a good moral these days, Carl Sagan made the point that even great experiments in science require the oxygen of the public interaction to stay alive. The public needs scientists to figure out the processes that drive our lives, to give us nonpartisan assistance in times of difficulty, to develop new vaccines to save us from our diseases. Scientists need to figure out how to make that case for continuing support and access. We should cherish our libraries and universities, and make certain that the public has access to the work being done there.

We don't know but can well imagine the manuscripts that might have been saved from the Library of Alexandria had we been less careless—there are thousands of ancient documents of many civilizations we only know about because somebody mentioned them elsewhere. But still: the library functioned for six or seven centuries, and we still remember and are inspired by its existence today. So: Is it truly lost?


This article was originally published on About.com in March 2013 as
http://archaeology.about.com/od/lterms/qt/Library-Of-Alexandria.htm
and was deprecated from ThoughtCo about September 2015. Like other articles recovered from About.com and ThoughtCo, this article has been updated and added here on WasteFlake.