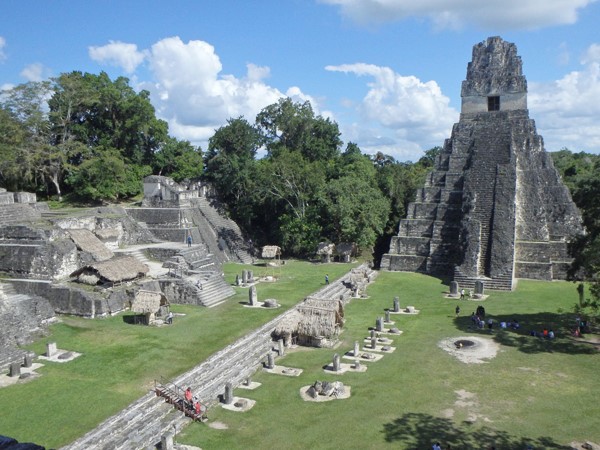 The Great Plaza at Tikal, located in the Peten peninsula of Guatemala and pictured here, was used as a source of runoff water by the Maya residents, part of a massive water control management system used for 1,500 years. Photo credit: Ed Nellis.

The Maya capital of Tikal, with a population estimated between 45,000–65,000 during its heyday between 682–800 CE, did not have access to a natural source of fresh water, such as a major perennial stream or lake. In the rainforest of Guatemala's Petén where Tikal lies, more than 80% of the annual precipitation falls between May and November; and all of that quickly slips through the local porous karst topography away from the surface. Today, potable water must be trucked in for residents at the nearby town of Zocotzal, including the staff of Tikal National Park. And yet, the city-state grew and flourished for over 1,500 years. How did they do that?

In the 21st century, an international team of archaeologists discovered the remains of a complex system of canals, dams, reservoirs, and filtration works at Tikal. Tikal's water management system was begun as early as the Middle Preclassic period, in the 6th century BCE, and the Maya refined and reconfigured it many times up until 900 CE, when it abruptly failed. The archaeological research has detailed the elements of the system and attempted to explain why what had been a sustainable urban environment for so long so disastrously ended. This essay presents some of the findings to date.

Discovery of the Water Control System at Tikal

Map of the Urban Center of Tikal with Reservoirs Drawn in Blue. No. 7 on the map is the central acropolis at Tikal, the three blue blobs directly south of 7 are, from west to east, the Temple, Palace, and Hidden reservoirs. Photo Credit: Elelicht

Many of the elements of the water management system at Tikal are enormous, and they were recognized as having been built by the Maya in the 19th century. Segments of a large ditch and embankment which seemed to surround the central core of Tikal were first reported to archaeological circles during the mapping of Tikal in the 1960s. Archaeologists Dennis Puleston and Donald W. Callender interpreted the structures as part of a defensive barrier and boundary.

Because there were some discrepancies, though, Puleston and Callender were explicitly tentative in their identification, but the notion of a defensive barrier surrounding Tikal became established in the literature for some 40 years.

In the first decade of the 21st century, a University of Pennsylvania team led by David Webster and his students reevaluated the earthwork and discovered that although the northern and western segments do appear to have a defensive function, the remainder of the earthwork segments mapped by Puleston and Callendar was not engineered to be defensive features at all. They hypothesized (described in Silverstein et al. 2009) that there was a previously undiscovered, immense water control system at Tikal. Later investigations by the University of Cincinnati revealed that Tikal's rulers constructed a massive water system, with reservoirs, dams, canals, causeways, filtration systems, and ditches to control access to water during the seasonal climate variations. Similar water control systems are known at other Maya capital cities such as Palenque.

An ancient Mayan reservoir at Tikal is unearthed, providing new insights into how the ancient Maya built for water management. Photo Credit: University of Cincinnati

The main elements of the Maya water control system were reservoirs, deep excavated tanks of water which collected the wet season precipitation running off expansive plaster surfaces on plazas and courtyards, which had been deliberately sloped to do just that. There are six large reservoirs mapped in the 9 square kilometers (2,200 acres, or about 3.5 square miles) that make up the central core of Tikal. Those reservoirs had been excavated around four separate existing arroyos: In the early studies of the site these reservoirs were thought to be stone quarries, and they probably did function as that first.

Three prominent arroyos cut west to east through the central Tikal zone: The arroyo south of the main Palace was the one most significantly altered. Three reservoirs were cut in a chain into this southernmost arroyo, called the Temple, Palace, and Hidden reservoirs, while others such as the Perdido and Corriental were located at swamp margins and still others (such as Tikal, Terminos, Inscriptions, Madira) were scattered around the city. They collected rainwater and supplied drinking and irrigation water to the residents.

The Temple Reservoir at Tikal was the highest in elevation and closest to the plaza of the three main reservoirs, but it was also the smallest tank, with a volume of approximately 27,130 cubic meters (over 7 million US gallons). The tank was roughly circular and about 90 meters (300 feet) across and about 8 m (26 ft) deep. Its location surrounded by the city's most impressive structures suggested to researchers (Scarborough et al. 2012) that the tank held some sort of ritual significance, but there is no doubt that the rainwater runoff from the huge structures and its plaza was of critical importance.

The Maya created silting tanks then quarried the deeper main body and lined it with clay and plaster. Berms were established from contoured bedrock enhanced by consolidated fill. Work on the Temple Reservoir was begun at least by 521–216 calibrated radiocarbon years BCE (cal BCE, Preclassic) and it was extensively remodeled during the Classic Period.

The Palace Dam and its associated reservoir were constructed by the Late Preclassic Period, with sloping basal dimensions of 80x60m by 10 m high (260x200x30 ft), and it was likely first built between 358–55 cal BCE. It is the largest prehistoric hydraulic feature in the Maya area and only the second largest in all of prehispanic Mesoamerica (the largest is the Late Preclassic/Early Classic Purrón Dam in the Tehuacan Valley). The dam was built out of the natural escarpment, enhanced with cut-stone and rubble and earthen construction sealed with cut veneer stone. Sluice gates were created by vertically stacked openings in the rock, although they are poorly preserved today.

The Corriental Reservoir and Canal

View of a Maya-built canal. Pictured is Guatemalan researcher Liwy Grazioso, who has participated in the work by a UC-led team. Photo Credit: University of Cincinnati

The Corriental reservoir was one of four Maya water tanks located next to seasonally inundated depressions or "bajos" within central Tikal. This reservoir was likely used as a public water source for drinking, cooking, and probably also bathing.
Corriental was one of the largest at Tikal, with an estimated capacity of 57,000m3 (1.5 million US gal), and it was strategically positioned to collect most of the surface water runoff from the southeastern parts of the city. Corriental is surrounded by a 4–7 m (13–23 ft) high berm with two gates letting water in and one complex spillway letting water out. A two-meter deep canal with a v-shaped channel directed catchment waters into the tank.

The tank itself was built during the Middle Preclassic (760–400 cal BCE), and it was constructed with a filtration device to filter the runoff to create potable water. A seasonally adjusted switching station was created by the Late Preclassic, as was the canal: the Late Preclassic is associated with an intensified drought cycle. See Scarborough et al. 2012 for details.

Tikal was abruptly abandoned about 900 CE, for a number of reasons, many of which were environmental. One clearly in evidence is that of industrial pollution. In the end, the water management system was contaminated with high levels of mercury, phosphate, and cyanobacteria. While all of these toxins are dangerous, the worst culprit is mercury. Cinnabar ore, also known as vermillion, is a blood-red pigment and a form of mercury generously used by the residents of Tikal.

The tanks were also prone to phosphate contamination, a toxic substance that oozed from middens of food and organic wastes, as well as cyanobacteria from the resulting plankton blooms. These plagued most of the reservoirs but not the Corriental. Tankersley et al. also discovered evidence for volcanic ashfall, which would also have brought polluting elements to Tikal. There were periodic eruptions by volcanoes during the Preclassic, Classic and Postclassic periods: El Chichon, Tajamulco, Acatenango and/or Atitlan were all active between 600–800 CE and Cerro Quemado was active about 800 CE.

One reason that Corriental was not as polluted as the reservoirs near the central plaza was that the Maya at Tikal constructed a sophisticated water filtration system there. To build their system, the Maya mined specific minerals—zeolite—from volcanic tuff deposits northeast of Tikal. Zeolite has the ability to filter out harmful microbes, nitrogenous compounds, and other insoluble and soluble inorganic toxins from water. Although known to the Romans, zeolite was used to make construction material, not for water purification—the only other known use of zeolite for water purification in the world did not occur until the early 20th century.

At Corriental, zeolite was combined with sand-sized quartz crystals and placed where the runoff entered the reservoir. During periods of flash flooding, the zeolite and quartz were pushed out of the filtration system and into the reservoir, and when that happened, the Maya rebuilt their filtration system.

The filtration system itself has not been identified—deposits from the last flash flood were found as deposits of zeolite and quartz within the reservoir. During its use, the lack of systematic pollution in this reservoir compared to the others is remarkable. Radiocarbon dating of organic materials brought in the reservoir silts in association with the zeolite showed that the filtration system was functioning between 2185–965 cal BP (i.e. 235 BCE–985 CE), an astounding 1,200 years.

The Maya water management system at Tikal as a whole was remarkably resilient and flexible: adjustments were made such that water was diverted and filtered properly, including high water periods during the Classic period and low water periods during the Terminal Preclassic. Scholars suggest at the onset of a Terminal Preclassic drying trend, maintenance on the reservoirs allowed Tikal to survive for a time after other centers were abandoned.

The sustainable system worked for nearly 1,500 years, until 900 CE, when Tikal's central control simply could not supply all the water demands created by an enormous population and an extended drought. Evidence at Corriental indicates that it continued to function into post-Maya collapse, although not the other reservoirs. The Maya system prevented overexploitation of resources, and sustained a very dense population, as the Maya engineers adjusted and adapted it for over a thousand years, an amazing feat by any culture.


This article was originally published on About.com about January 2015, as
and was deprecated from ThoughtCo in 2017. The top image of the great plaza at Tikal is by Ed Nellis, taken in 2014. Like other articles recovered from About.com and ThoughtCo, this article has been updated and added here on WasteFlake. Permission to republish the images was kindly provided by K.B. Tankersley.