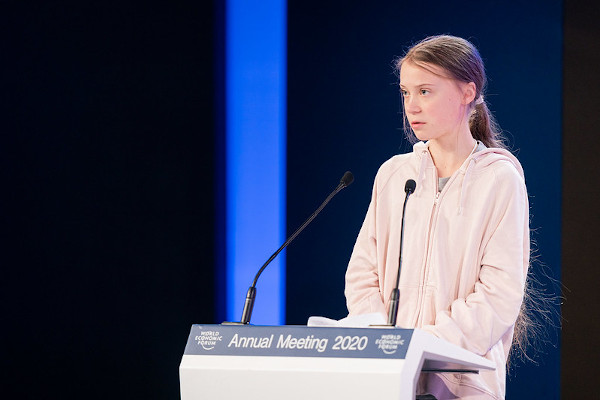 There are many many reasons to want Donald Trump and his enablers out of the United States government. This one has deep echoes from ancient history.

This image is of the climate and environmental activist Greta Thunberg, one of many people who has inherited a deep sense of commitment in the face of skepticism and insults from people in power. She was speaking at the World Economic Forum Annual Meeting 2020 in Davos-Klosters, Switzerland on the 21st of January this year. Photo copyright World Economic Forum, Manuel Lopez.
I am Cassandra (she who entangles men). I am the daughter of Priam, king of Troy, and his wife Hecuba. I had fifty siblings, I was the youngest and I am the only one left on this earth. As rumors of a war with Greece came to the palace at Troy, I bargained with the god Apollo to give me the power to peer into the future. He wanted to sleep with me, but after I knew what was to come, I shunned his advances (he struggled with me like a wrestler and breathed divine grace into my spirit) and he cursed me (wet my lips with his tongue). Since then no one has believed anything I have uttered. I warned my brother Paris not to go to Greece (fear the face that launched a thousand ships); I tried to destroy the wooden horse (beware of Greeks bearing gifts); I told my father Priam and his advisors that Troy would lose the war. They all ignored and reviled me.

And when the blood-soaked Trojan War was over and all my relatives were slain, I became a wandering beggar gypsy, a wretched half-starved vagabond. The dread pain of true prophecy still spun in my head, whirling with premonitions. I fled to Athena's sanctuary, where Ajax (the Lesser) found and dragged me off (caught within the hunting nets of fate). I became Agamemnon's prize (a wild creature newly captured) and was taken to Mycenae where his jealous wife Clytemnestra killed us both (a slave who died, an easy victim), a domestic tragedy in which I was a footnote. 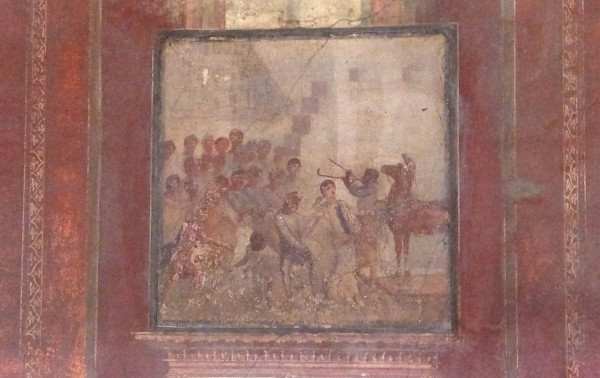 Fresco from the House of Menander at Pompeii illustrating how the people of Troy stopped Cassandra from destroying the Trojan horse. First-century CE. Image by Amphipolis.

I was Cassandra, and today I am Greta Thunberg, Anthony Fauci, Al Gore, Wangari Maathi, David Suzuki, Robert Redfield, Rachel Carson, Donella Meadows, and Randy Shilts. I am legions of scientists in laboratories and universities and I am nurses and doctors in hospitals. Here we all stand before the chicken-hearted men and women who govern us.

For decades we have warned the people in power of the dangers of ignoring science, describing the potential devastation of climate change, environmental pollution, and pandemics. Decades of research disregarded and ignored for political gain by emperors-for-life and democratically-elected politicians alike: those in power were seduced by corporate interests to hang on to unsustainable processes out of their dread of change and unpopularity.

They call themselves conservatives because they wish to maintain the status quo, which perhaps sounds reasonable but is not in the face of increasing storm intensity, flooding, high tides, wildfires, desertification, plant and animal extinction, food insecurity, and an out-of-control pandemic. Worse, the current U.S. administration is directly working to retrace steps taken in the past, dissolving governmental support for clean air and water, pretending that diseases will disappear by themselves, deluding their followers into thinking that the only possible choice is to keep on keeping on, that masks are a sign of weakness. Generations of far-seeing people have been and remain mocked, ignored, and threatened.

There are new industries that would create new jobs and more training, that could give the country (and the world) a chance to recover and rebuild. But empowering them would negatively impact those industries unwilling or unable to change, and so these particular governing bodies still do not, will not listen to the Cassandras. This November, U.S. voters have a chance to kick out Trump and some of the congresspeople who sat by and supported him or did nothing to stop him—not all are up for reelection this year but there will be chances in coming years. In their stead, we must elect people who have the courage to work to mitigate climate damage, get a handle on the pandemic, and reconstruct an economy that will better serve the people who desperately need those requirements.

Not every citizen of our planet has the right to peaceably oust those who would put their own economic and social benefit ahead of the rest of us. Vote—if you have that right—as if your life depends on it.