Recovering from Catastrophe: Lessons from the Past

The Late Antique Little Ice Age (LALIA), sometimes known as the Dark Ages Cold Period (DACP), is what scholars call a period in the first millennium CE when a nasty set of environmental changes impacted Europe, Asia, and other places around the world, roughly the same time as the first known appearance of the Bubonic plague, and significant social upheaval. The 21st century can learn a lot from our 6th-century ancestors.

The LALIA/DACP brought unseasonably cold summer temperatures, drought, crop failures, and famine, all of which are thought to have contributed to the establishment of the Justinian plague, the transformation of the eastern Roman Empire and the collapse of the Sasanian Empire, migrations out of the Asian steppe and Arabian Peninsula, and political upheavals in China. Widespread climate change, followed by a pandemic and all kinds of social unrest adjusting to the new normal. Sound familiar?

In the late 1970s and 1980s, U.S. geoscientists Richard Stothers and Michael Rampino read deeply into ancient and classical literature seeking evidence of volcanic eruptions. Among the events they identified was the "Dust Veil of 536," an abrupt appearance of thick persistent fog in the air in patches from Europe to Mesopotamia, combined with a drop in overall temperature and precipitation. One literary reference to the disarray is Fimbulvinter, found in Ragnarök, the Classic Norse myth about the end of the world, in which farmers suffered three years in a row without a summer. 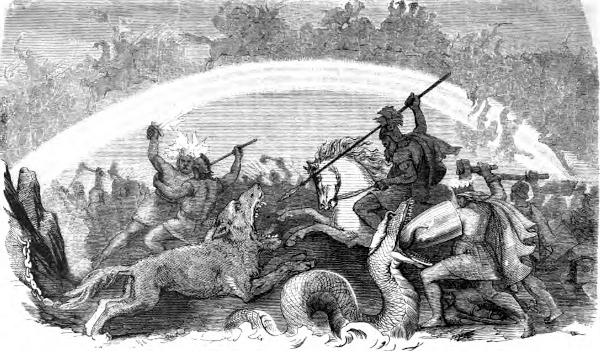 
Since Stothers and Rampino's remarkable work, additional literature search, and archaeological and geological studies have shown that adverse environmental conditions in Europe and Asia beginning about 536 lasted well into the 7th century.

The period including the Dust Veil in Eurasia is known to some scholars as the Late Antique Little Ice Age (LALIA, 536–660), and to others as the Dark Ages Cold Period (DACP, 410–775 CE)—occurred about 1,000 years earlier than the better known Little Ice Age (1303–1860). Working separately, climatologists identified DACP, and environmentalists discovered LALIA, eventually uniting their efforts in the 21st century. The period between 300–700 CE was once termed the "Dark Ages," a time associated in Europe with the fall of the Roman Empire and the ascendancy of the barbarians, when written records were rare. Historians have long recognized that the Dark Ages weren't all that dark: religious scholars continued to keep records about events. Rather than the "Dark Ages," historians prefer "Late Antiquity."

These 20th-century researchers weren't the first to use ancient documents in this manner, of course. An early modern scholar looking into ancient literature for reports of astronomical events was Jean Jacques d'Ortous de Mairan (1678–1771), whose 1733 treatise "Traité physique et historique de l'aurore boréale" pointed out that the first century CE Greek writer Pliny the Elder described an aurora borealis. But Richard Stothers, one-time director of NASA's Goddard Institute for Space Studies, and his geobiologist colleague Michael Rampino began collecting a catalog of ancient manuscript descriptions of celestial events and their impacts on the environment. They were the ones who identified what would become known as the LALIA. English climatologist Hubert H. Lamb (1913–1997) was another scholar poking about in Late Antique documents and he is cited as the identifier of the DACP in the 1980s.

The LALIA/DACP began its deadliest attack on Eurasia in the 6th century partially as a result of multiple massive volcanic eruptions—one was the Ilopango Tierra Blanca Joven eruption in El Salvador—that threw megatons of dust into the atmosphere. The amount of radiant sunshine available in the region varied throughout the period, with a notable 7th-century minimum. Different parts of the world experienced the LALIA/DACP differently, but it was a classic perfect storm of how climate change can affect human settlements with little or no warning. Cultural reactions included the rise and fall of empires, massive human migrations out of central Asia, and political upheavals.

The world did pretty much recover from that catastrophe or rather set of catastrophes, because people were forced to adapt, to discard behaviors that weren't working and find new ways, a process that by its definition created social unrest. A 2020 study of water-buried skeletons at the Levänluhta site by Finnish archaeologist Markku Oinonen and colleagues found evidence that survivors of the LALIA/DACP in Finland adapted to the extreme conditions by ending practices they followed for thousands of years—farming and pastoralism—to focus on hunting and gathering freshwater, marine, and terrestrial resources. That must have been a traumatic alteration of life as normal: and we in the 21st century can learn from that.

Massive changes are difficult when the people in power got there using the previous system, even though that system no longer works. One thing our 21st-century version of the world seems to have recognized (at very long last) is that consigning millions of humans to lesser status on the basis of skin color is a stupid and reckless idea and a ludicrous waste of badly needed resources. Out of the 2020 coronavirus disaster, if the protesters are persistent and the leaders either agree or are deposed, we may develop new leadership and new programs and new ways to live. We must recognize that our life on this planet relies on every single person in the world as a resource (at the very least) for the generation of new ideas about how to go forward in response to the climate and pandemic issues we face. Let us work to enable, compensate, and protect each other accordingly.