A study on human genetics published in the journal Nature on July 8, 2020, lends support for the long-hypothesized Precolumbian contact between Native Americans and Polynesian sailors. A research team led by Stanford University physicist Alexander G. Ioannidis performed a high-density genome-wide analysis of modern Polynesian people. The study found traces of a Precolumbian admixture of Native American genes among a group of 166 individuals from Rapa Nui (also known as Easter Island), and another 188 individuals from islands spanning the Pacific.

The genetic analysis identified myriad traces of what was already known of the history and archaeology of the original colonization of the Polynesian islands, as well as that of the much later European colonization. For example, evidence was found for the presence of Native Americans at the time of the European colonization of Rapa Nui, between 1722 and 1870 CE—the Europeans brought enslaved Native Americans with them when they landed. But the analysis also clearly provides evidence of the presence of Native American people in the Marquesas islands as early as 1150—1230 CE, well before European imperialism reached this part of the world. (The following map is from the open-source article by Valentí Rull; EI is Easter Island). 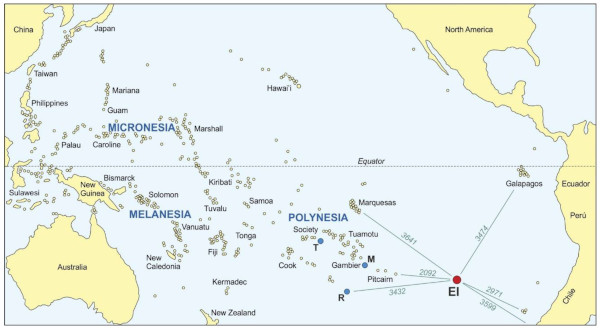 The Pacific islands were colonized by a long, slow process that started from Taiwan about 5,500 years ago. Untold generations later, their descendants arrived on Rapa Nui about 1200, and visited the South American mainland by the 15th or 16th century. According to the new research, a small contingent of Americans came westward about 1150. The idea that the Americans went westward had been proposed by explorer/ethnographer Thor Heyerdahl in 1947 after he'd built a raft and followed the currents to take him into the Pacific islands. Heyerdahl had a more grandiose idea for the American component: but he landed at Tuamotu south of the Marquesas and his sailing strategy is the one hypothesized today.

The presence of Native American people in the Marquesas islands was first suggested by the inhabitants themselves, such as on the island of Fatu Hiva, where origin stories report that their ancestors came from the east. Linguistic data—similarity of names for certain objects in Polynesia and in the Americas—have been noted. South American skeletons bearing Polynesian DNA, and the bones of pre-Columbian domestic chickens (which were domesticated in Southeast Asia) in Chile and on Rapa Nui have been reported. And, most tellingly perhaps, South American-domesticated sweet potatoes were cultivated and consumed in the Cook Islands by 1000-1100 CE, Hawai'i by 1290-1430 CE, and Rapa Nui by 1525 CE. Maize, another American domesticate, has been found on Hawaii island in contexts dated between 1300–1625 CE.

The new evidence provided by Ioannidis and colleagues particularly identifies genetic data from American groups Mixe and Zapotec in West Mexico; Zenu from Ecuador; and Magdalena de Cao from the Peruvian coast. That admixture suggests who the Americans were who came to the Marquesas and how that came about.

Maritime Trade in the Americas

Beginning at least as early as 600 CE, a maritime trading route existed along the Pacific coast of the American continents between western Mesoamerica and the central Andes. Using balsa wood canoes, people moved goods and knowledge along the settlements and societies of the Pacific coast (and of course the Atlantic as well). Goods and ideas thought to have been moved along the trade route included forms of ceremonial architecture and mound groups; pottery forms such as stirrup-spout vessels; mold-made hollow figurines; and metallurgy, in particular, copper working. Copper working was invented first in South America and moved into Central America in the form of copper objects—tweezers, needles and small bells first appeared in the Epi-Classic period of west Mexico (700–900 CE).

The sea route was established by traders from Ecuador and Colombia, who began a coastal trade route in South America from Chile to Colombia by at least 100 BCE, transmitting metal ornaments, emeralds, Spondylus oyster shells, and domestic guinea pigs. The trade expanded to western Mesoamerica sometime before metallurgy reached western Mexico.

Trading Ships of the Americas

Although the trade probably began in simple canoes, their ships became large, ocean-going sailing rafts built of balsa logs. Visiting the Caribbean in the 16th century, Italian trader Girolamo Benzoni described a raft carrying 20 men with many silver objects which they exchanged for shells. A sketch was published in his 1565 book Historia del Mondo Nuovo. As archaeologist Dorothy Hosler and then-student Leslie Dewan pointed out in 2008, the sails pictured below are fixed, which wouldn't allow cross-continent transport, and the drawing may not be an accurate rendition of the rigging or may be an accurate image of a raft only used for local transport. 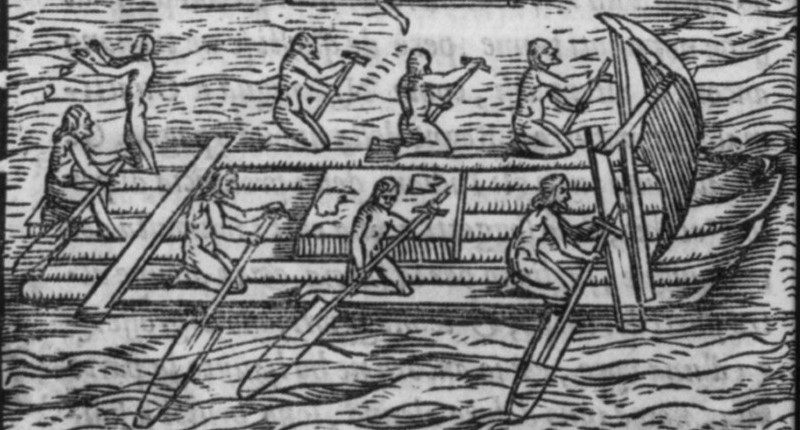 Ioannidis and colleagues suggest that (at least once) ocean-going canoes built by Americans, crewed by at least ten persons from Ecuador and West Mexico, and carrying goods including sweet potato and corn, were sucked off the coast of Ecuador and into the South Equatorial Current and landed on the shores of one of a handful of islands in the South Marquesas. There they met the exploration team of Polynesian sailors: and the rest is (genetic and oral) history.

The South Equatorial Current is what meteorologists call a group of currents that occur in all oceans and flow east to west between the equator and about 20 degrees south. The currents vary throughout the year, and their fluctuations impact the local and global climates. There is no doubt that both the traders and the explorers were aware of the currents, but it's likely that the traders' departure was not anticipated.

While we can only speculate, the data indicates that perhaps as many as ten traders from Central America encountered the great Polynesian expeditionary force on a small island in the Marquesas. The traders would have had experience meeting people who didn't speak their language, the explorers very experienced in island colonization. What they had in common was sailing.

The first contact might have been violent—but maybe not: the traders survived long enough to have descendants and share technologies. The traders almost certainly brought sweet potato on their raft: the word used by the Canari people of Ecuador for "sweet potato" is "cumal" and the Polynesian word is "kumala." The genetic signature of the American traders is found in people living on other islands in the Marquesas and elsewhere, including among people on Rapa Nui.

The Polynesian sailors who met the traders somewhere in the Marquesas were arguably the most successful exploration force our planet has ever known; the Central American traders were adept and curious and survivors of a cross-ocean ordeal. Archaeological research continues to show us the importance of sailing in premodern times—the initial population of the Americas (ca. 20,000 years ago) and Australia (ca. 50,000 years ago) are both thought to have been assisted by rafts. The tantalizing glimpse into this first contact between sailing communities is a piece of that knowledge.