Archaeologists Christophe Delaere and Jose M. Capriles writing in Antiquity in August 2020 describe a set of Inca period relics recovered from a reef in Lake Titicaca on the border between Bolivia and Peru, additional evidence that the lake and its vicinity has been a magnet of pilgrimage for visitors for at least 2,500 years. This Background Check discusses the importance of the region as a significant religious and spiritual pilgrimage site.

The small stone box containing a camelid (llama or alpaca) carved from a spondylus shell and a rolled cylinder of gold leaf is just the latest found of many votive deposits laid by Inca and earlier worshipers on the floor of Lake Titicaca. 
What is Lake Titicaca?

Lake Titicaca is a freshwater lake, at 3,232 sq mi (8,300 sq km) the largest navigable water body in the world lying at an altitude of 12,507 ft (3,810 m) above sea level. The lake has two main bodies of water, divided by the Copacabana peninsula. In the Quechua language of the Inca, Titicaca might mean "Puma Mound," which in turn might be a reference to the Sacred Rock (Titikala), a large reddish slab of sandstone on the main ridge of the lake's largest island, the Island of the Sun. 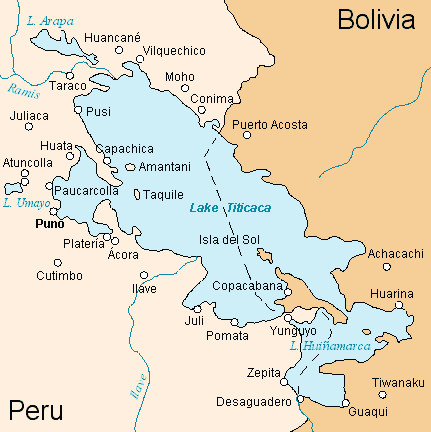 
When the Inca empire first visited Titicaca in the 15th century CE, they found the remnants of the great Tiwanaku state, which flourished between 800–1150 CE. On the Island of the Sun, Inca visitors found a Tiwanaku sanctuary, still maintained by the local Aymara elite. Like many imperial forces have done in the past and present, the Inca coopted the buildings and built new ones, exiled the elite Aymara leaders to the mainland, extended the Inca road system to the lake, and used the site to create a new origin myth.

They say that it was at night and that there he the Creator made the Sun and Moon and Stars, and that he ordered the Sun and Moon and Stars to go to the Island of Titicaca that is near there, and from there they rose to the sky. And at that time, the Sun who wanted to rise in the figure of a very flamboyant man called to the Inka and to Manco Capac, as their superior and said: You and your descendants will be Lords and will subjugate many nations; take me as our father ... and at that point, he ordered the Sun, Moon, and Stars to rise to the sky and put each one in their place." (priest and Quechua scholar in Cuzco Cristobal de Molina 1529–1585, translation by Brian Bauer, cited in Dearborn et al. 1998).

Origins of the Sanctuary

The Inca may have coopted the Aymara/Tiwanaku myths: but there is evidence that the Tiwanaku themselves coopted the sanctuary of an older myth, the Yaya Mama religious tradition established on the Copacabana Peninsula somewhere between 800–460 BCE. This culture is marked by sunken temple courts, stone sculptures, supernatural iconography—and domestic maize. Nowhere else on the planet can maize be cultivated above 3600 masl: but a variety of maize known as tunqu grew and grows today in terraces on the Copacabana peninsula and the Isla del Sol (Staller 2016), possibly, suggests Staller, because the lake effect keeps the ambient and soil temperature slightly warmer near the lake. In addition, evidence in skeletal remains from Yaya Mama burials on the Copacabana peninsula indicates that traders and pilgrims from various parts of South America visited the Yaya Mama (and of course, died there, reported in Juengst 2017).

No evidence for Yaya Mama shrines has been noted to date on the Island of the Sun, but by the end of the period, during what Stanish and Bauer (2002, 2004) call the Late Titinhuyani Period (500 BCE-400 CE), the Sacred Rock area had become a local shrine for the island peoples.

The votive deposit reported in Antiquity in August 2020 was discovered underwater on a natural reef shelf in the lake. It is dated to the Inca period and consists of a stone box sculpted from an andesite block measuring 36x27x17 cm. A hole had been pecked out of the center and in it were placed a small (28x40x4 mm, about .15 inch long) figurine of a llama carved from a spondylus (thorny oyster) shell and a sheet of gold foil (25x13 mm). The hole was then capped with a plug. 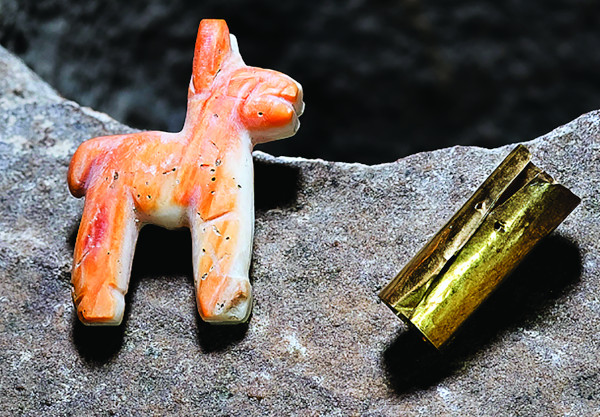 
Other similar ritual deposits were recovered from the lake (reported in Delaere and Capriles 2019), representing ceremonial offerings of both Tiwanaku and Inca states. Those artifacts included pottery, shells, lapidary stones, and the bones of juvenile llamas.

Underwater votive deposits are commonly found in many different cultures, probably the best known are the bog bodies of northern Europe. The Inca and Tiwanaku votive deposits are evidence supporting the notion that the Titicaca lake basin was of critical spiritual importance for at least 1,200 years and perhaps longer.

The Meaning of Votive Deposits

Historic descriptions of Inca rituals performed at Titicaca include Spanish colonials, 17th-century Augustinian cleric Alonso Ramos Gavilám. Gavilám reported that the blood of children and animals was placed into stone boxes and lowered from rafts into the lake with the aid of ropes, turning the lake temporarily red. Many of the votive deposits recovered to date contain miniatures of camelids as well as men and women, likely clothed in elaborate textiles and featherwork.

Delaere and Capriles argue that the gold cylinder might represent a miniature version of a chipana—a bracelet usually worn by Inca noblemen on their right forearms. Combined with the rituals associated with child sacrifice, the underwater deposits were thus a display of powerful forces, glorifying specific leaders and cementing pan-regional cooperation.

One could also consider what is illustrated by the miniature llama: a tiny representation of the animal upon which so much of the economic activities of most of the ancient civilizations of South America depended, especially but not exclusively for trade and pilgrimage. And, it was carved from spondylus shell, a ruddy-carapaced spiny oyster that was also of ritual significance to the Inca, and harvested from the Pacific Ocean no closer than 1,200 miles to the west, and 13,000 feet down from the lake where it rested.