On August 6, 2020, an international team led by archaeologist Rémy Crassard of the Centre national de la recherche scientifique (CNRS) reported that Neolithic pastoralists in Southern Arabia used the technique known as fluting to finish arrowheads about 8,000 years ago. Fluting, known almost exclusively from American paleolithic cultures such as Folsom and Clovis, is a risky maneuver with results that are arguably beautiful but not a significant technological improvement. Modern-day flintknappers report that between 20–60% of the time, attempting to flute destroys the stone tool. This Background Check explores the perennial question: Why would anyone do that? 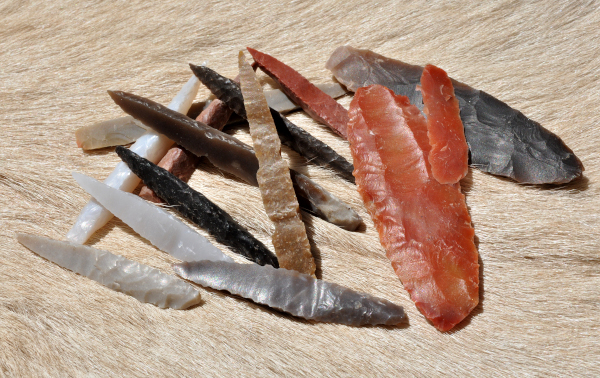 Stone fluted points dating back some 8,000 to 7,000 years ago, were discovered on archaeological sites in Manayzah, Yemen and Ad-Dahariz, Oman. Until now, the prehistoric technique of fluting had been uncovered only on 13,000 to 10,000-year-old Native American sites. © Jérémie Vosges / CNRS

An experimental archaeologist flintknapper takes at least a half-hour to an hour or better to make a stone projectile point, whether the point is intended for the end of an arrow shaft, a spear, or an atlatl dart. Fluting is almost always the last or near the last step, when the knapper carefully knocks off a single long flake from part or the entire face of an object, leaving a distinctive smooth groove or channel.

In the 1920s, when fluting was first identified on a stone tool in the Americas, archaeologists surmised that the channel was useful for bloodletting—like a bayonet in World War I—but that soon was debunked because the flute is mostly hidden by hafting materials which bind the tool to the shaft. Other reasons put forward were to make it easier to haft (but unfluted points are easily hafted); shock absorption, which has some tentative support (Story 2019); stylistic or artistic purposes; and for hunting magic. In this sense, "magic" refers to human behaviors that don't necessarily technically improve something, but in the performer's mind improve the chances of a good outcome.

Differences Between American and Arabian Fluting

As Crassard and colleagues point out, it's a mistake to solely rely on the American model. In the Americas, fluting was widespread and in use between 13,000 and 10,000 years ago. In southern Arabia (primarily Yemen and Oman), fluting occurs within a comparatively narrow spatial range and dates between 8,500-6,500 years ago. The Americans were primarily but not exclusively wide-ranging hunters of large game (bison and elephant), many species of which are extinct; the Arabians were primarily hunters of gazelles, and at least part-time, semi-sedentary pastoralists of cows and later sheep/goats. 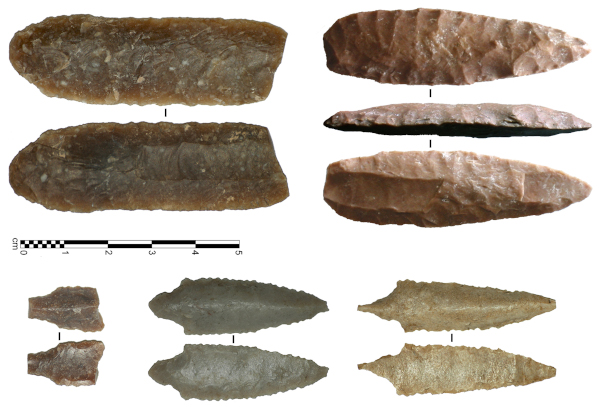 Fluting shows up on points from several Neolithic sites in southern Arabia, but the site of Manayzah has the most evidence, includes lithic pieces that represent the complete technical sequence of tool production (known in the trade as chaîne opératoire).

Manayzah is a deeply stratified rockshelter on the lower slopes of a wadi in what is today Yemen. The earliest substantial use of the cave was about 6,100 BCE when part-time hunter-herders (pastoralists who participated in long-distance trade) tended to domestic cattle and later sheep and/or goats. Raw materials for the fluted and unfluted stone tools they made are cherts, chalcedonies, jaspers, and obsidian.

Crassard and colleagues suggest that since the fluting was not used consistently, the aim of the Arabian fluter was primarily to exhibit the knapper's prowess—an artistic pride in their work. That has also been attributed to the American fluters. The American and Arabian flutes are decidedly independent inventions: but they certainly have aspects in common that give us a clue as to what the purpose was. Both sets of flintknappers were specialists who fed groups who were at least partially dependent on hunting; both selected fairly high-quality material to work from. The points are remarkably pretty rather than utilitarian: and some amount of hunting magic at work cannot be ruled out.