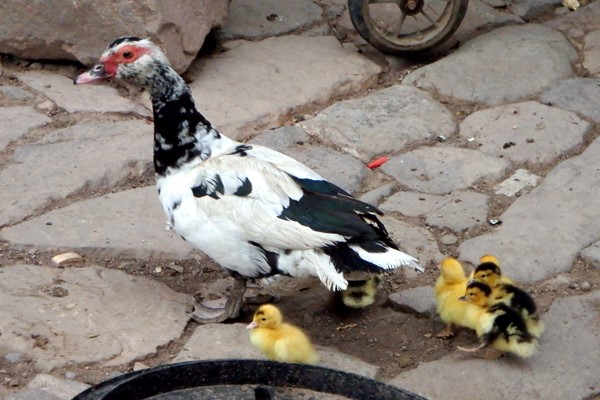 The muscovy duck (Cairina moschata), sometimes called the Barbary drake, is a type of duck with a fairly unusual domestication history. Unlike other members of the duck species, but like guinea pigs, muscovies were domesticated in South America and dispersed from there by European colonization forces. They are among the handful of birds domesticated in the Americas, including turkeys (about 100 BCE–100 CE) and (arguably) scarlet macaws (ca 1300 CE).

The image above is of a muscovy duck and ducklings on a farm in rural Peru. Photo taken in October 2012 by Ed Nellis.

The muscovy is a perching duck of the tropics and subtropics, with a large body form and a long tail which the duck uses to balance itself in its movement around in trees. Currently, wild muscovies are distributed along both coasts of Mexico, southward through Central America, and into the forested lowland areas of South America including Peru, northern Argentina, and Uruguay.

Although direct archaeological evidence (that is to say, muscovy duck bones) is fairly rare, convincing images of C. moschata are illustrated on clay pottery from Moche and Chimú cultures and are arguably illustrated in Aztec codexes and other iconographic art from Mexico.


Etymology of the Muscovy Duck

There are several postulated theories about why this duck is "Muscovy," which means "from Moscow." Its Latin name is Cairina moschata, which means "musky animal from Cairo," more or less, and it was Carolus Linneaus who assigned that to the duck in 1758. One possible association is to the Muscovy Company, Sebastian Cabot's venture to middle America in 1550; it's mentioned by Bryan Stevens on the Origins of the Birds page. That's also intriguing because Cabot was associated with the Spanish cartographer Alonso de Santa Cruz, whose students in Mexico City made the Uppsala Map about 1550. The earliest reference to "muscovy duck" is said to be from about that time, so it could be true. 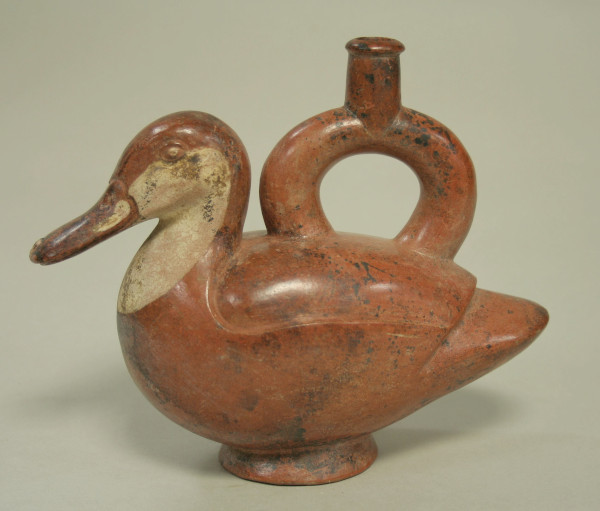 The earliest documented domestic muscovies are from the Mochica culture in southern Peru beginning about 50 CE, and have been found up into coastal Ecuador in sites dated about 80 CE; they were in Bolivia between 600–1000 CE, and into Central America by about 750–950 CE. Such scattershot dates and places suggest to some scholars a lack of data, and that the real story of muscovy domestication has yet to be discovered. After the arrival of the Spanish conquistadors in the mid-16th century, muscovies were quickly adopted by the colonists and then taken home and thence spread out into the wider world. (see Stahl 2005 for a detailed analysis.)

Wild forms of muscovy duck are grayish-black on the top and black with green and purple iridescence on the underside with prominent white patches on their wings. Known to flock in groups of fifty during the breeding season, most of the rest of the time muscovies fly in small groups or alone, staying along stream banks and moving into savanna areas during the wet season. 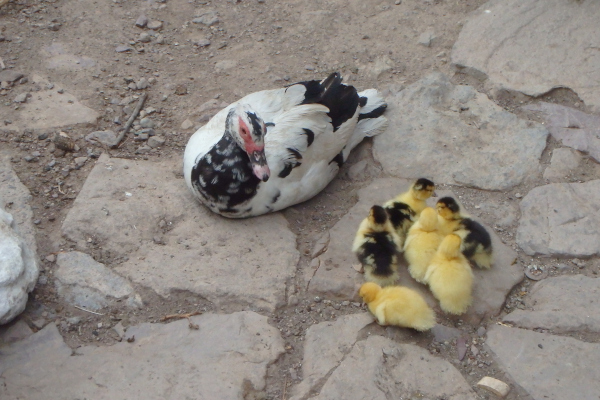 A muscovy duck and her brood sit on a farmer's patio in Peru. Image: Ed Nellis

Muscovies are territorial, have no fixed breeding season, and tend towards prolific egg production with rapidly maturing hatchlings. Archaeological evidence of domestic muscovy duck (versus wild) has been difficult to obtain and identify when it is excavated. Peter W. Stahl examined 34 ducks and found 54 characteristics with significant variances between wild and domestic versions, but primarily, domestic muscovies are larger and have longer wingspans. Domesticated males weigh an average of 6 lbs (2.7 kg), females 3.3 lbs (1.6 kg), and both sexes have varying amounts of red caruncles on their faces and bills. U.S. geoscientist Joni Downs and colleagues (2017) found that muscovy ducks easily adapt to urban and suburban locations, although they are not always welcomed there by human inhabitants.

The muscovy duck is valued today for its uniquely rich flavor, a fairly high yield of breast meat, and low-calorie content. Eleven different breeds are known today, including several in China, where the famous Chinese genetic engineering experiments of the last 250 years (and, of course, without direct reference to genes until very lately) have been meticulously recorded. The genetic structure of C. moschata was first recorded in the twenty-first century.

Scholars such as Shi-Yi Chen and colleagues and Jing Sun and colleagues have found only 4-6 haplotypes, with simple haplotype components and low genetic variability, leading them to conclude that most of the Muscovy ducks they had access to—from several different populations around China—probably came from a single domestication event, in South or Central America. Alternatively, they add, this may simply represent an example of the bottleneck effect seen in many introduced species, combined with that of careful, high-strength breeding regimes typical of Chinese agricultural experimentation. Similar low diversity has been found by Adeniyi C. Adeola and colleagues in Nigeria.


Note: The first version of this document was published on About.com in October of 2013, at http://archaeology.about.com/od/ancientdailylife/fl/Muscovy-Duck.htm. It was deprecated there in 2017. It was part of the Plant and Animal Domestication project, and most of those articles are preserved in ThoughtCo in the category called Animal and Plant Domestication. See other articles recovered from deprecation at About.com and ThoughtCo.

Thanks to Mo Hurley and Jim Jacobs for suggestions on etymology.