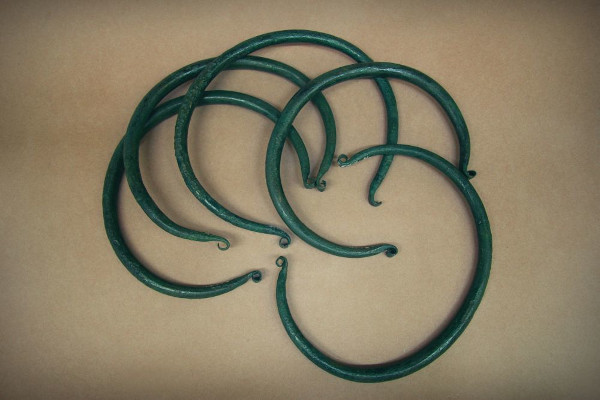 New evidence that bronze neck rings from central Europe about 4,000 years ago represented money was described in a research article (Kuijpers and Popa 2021) published January 20, 2021. This Background Check discusses what archaeologists and allied specialists in other fields mean when they say "money," a brief overview of the history of money, and a description of what the heck is a neck ring. Illustrated above are five bronze neck rings (Ösenringen) from a hoard dated to the Early Bronze Age of Central Europe. Image credit: M.H.G. Kuijpers.

To anthropologists, economists, and archaeologists, money is primarily a symbol signifying the exchange of something. At its most basic, property changes hands, and money is the representation (and facilitator) of a part of that exchange. Money can be coins and paper, but it can also be any object that the trading partners agree is appropriate.

Scholars have long debated the meaning of property exchange, but in general, there are two distinct exchange purposes: gifts and commodities. Most if not all transactions are a bit of both, and some scholars argue that the distinction may be a creation of modern mentalities.

In addition to facilitating an exchange of some type, money can also be used as a type of storage, a means of accounting, a method of transferring or sharing culture, and a way to express social hierarchy. And, from an archaeological standpoint, the very same artifact can be all of these things in sequence (throughout its working "use-life") or at the same time. 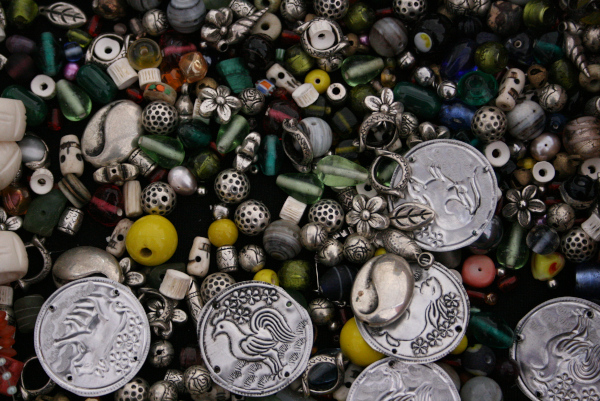 The origin myth of money reports that money arose as a matter of convenience. The earliest financial swaps took place in a market (sometimes called "fairground barter"): people brought goods to a market and exchanged them with others for a different set of goods. I trade my sheep for your hoe. Money developed, so the myth goes, to ease that transaction and reduce and replace barter.

Among others, anthropologist and sociolegal scholar Bill Maurer (2006) argues that the idea of money arose not out of convenience, but as a result of a cultural transformation that forced people to think about exchanges in a completely new way. At some point, market exchanges needed to be regulated (how many sheep is that hoe worth?), and longer-term stability was found to be preferable (I can't really spare my sheep right now). One-half of the immediate trade of goods morphed into something of value that people could save and use off-season. Not convenience so much as an economic necessity.

Market exchanges have a long history. Most ancient and modern cities and towns around the world have established one or more shared central open spaces, and the ancient function of a plaza was a set-aside place for people in a village to interact, talk to one another, tell stories, and swap information and goods, among other things. 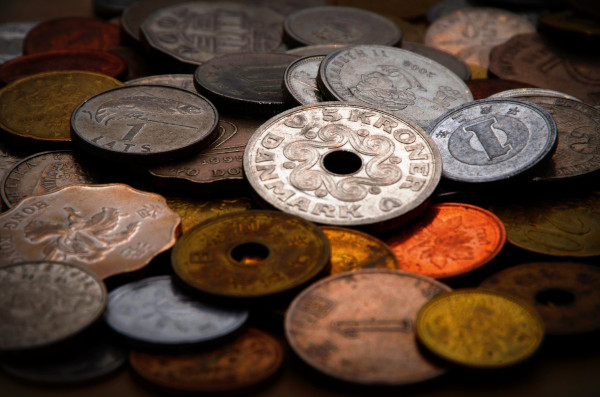 Collection of coins around the world. Image credit: Richard Hopkins.

Archaeologists Maikel Kuijpers and Cătălin Popa describe evidence that in central Europe, bronze neck rings (Ösensringen in German) were in fact ring ingots, a monetary commodity. But rings likely started out as a personal ornament.

Ösenringen were made in the Early Bronze Age of central Europe for a few centuries around 2000 BCE. There is no doubt that the neck rings were originally intended as personal ornaments, flat hammered to a smooth finish and with rolled or hooked ends (Ösen means "eyelets", a reference to the hooked ends). They were worn about the necks of people of all ages and social statuses, varying with location and period. They turn up in archaeological ruins of villages, in burial contexts, and in hoards—essentially below-ground storage facilities.

Archaeologists noticed several steps in the process of converting the lovely personal decoration to commodity money. First, Ösenringen began being made from a uniform metal composition, using copper from the same source in the eastern Alps and using the same or similar production processes including molds. According to archaeologist Helle Vandkilde (2005), neck rings were made in two weights: Ösensringen from southern Germany, upper Austria, and Bohemia weigh between 140 and 180 gms (~5–6.5 oz); but in lower Austria, Moravia, and Poland, they are heavier, weighing between 180 and 210 gms (~6.5–7.4 gms). At some point in this process, say scholars, the neck rings took on the meaning of "trade ingot" because the bronze in them could be reworked. People desired Ösensringen not (just) for personal beauty but because the rings held a standard amount of reusable bronze. 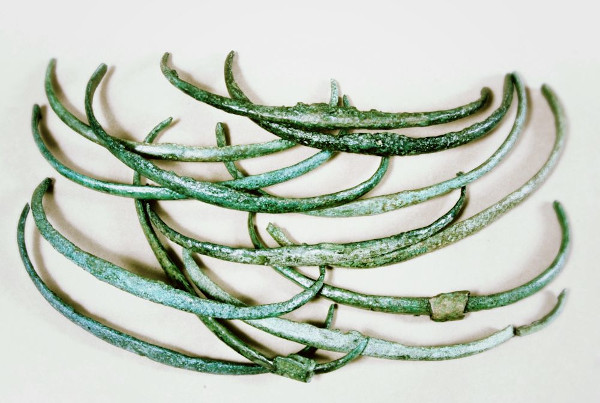 Over time, the weight of the objects decreased systematically, and the form changed and simplified, losing the pointed and hooked ends to produce rib-shaped Spangenbarren (bars). Kuijpers and Popa propose that the production of perceptibly identical copies of rings and ribs signals to us that they had become commodity money. They also argue that such use encouraged the independent rise of a system of weighing in Central Europe.

According to Kuijpers and Popa, the similarities of objects found in hoard contexts are especially striking. Kuijpers and Popa looked at 2,639 rings and 1,780 ribs from hoards and found that the similarities within hoards were quite high. Hoards of rings with a peak weight of 195 grams had a similarity index of 70%—in other words, in a hoard of 10 rings, seven were close enough in weight to be perceptibly indistinguishable from one another. Intriguingly, they found that frequently, the rings were stored in bunches of five.

Ösenringen are clearly prettier than your average metal ingot (and easier to transport), and definitely prettier than they need to be as commodity money. Over time, neck rings decreased in occurrence in hoards and village contexts, and in their place, a plainer rib form became dominant, and some scholars argue that the rib is an evolutionary descendant of the ring. The ribs were likely easier to make, may have been easier to infer weight by the buyer, and were just as easy to convert into raw metal.

What that implies is a single Ösenringe could have functioned as a personal ornament, been used as money in a barter deal, and been prized for its metal content at the same time, or at different times over the course of its use. No wonder archaeologists are a little nutty.