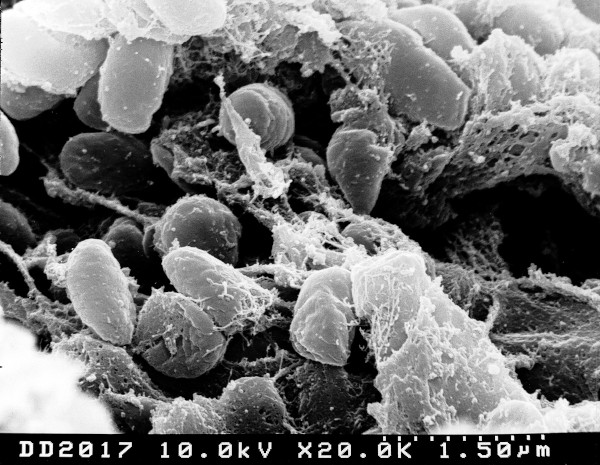 Yersinia pestis is the name of the bacteria that causes the bubonic plague, a monster of a disease that has been killing humans for at least 5,000 years. Three historic pandemics—the 6th century CE Justinian Plague, the medieval Black Death, and the 19th-century bubonic plague—have strong similarities: skin disorders, swellings (called buboes) in the lymph glands, coughing and spitting up blood, and possibly activated typhus and smallpox. All of these pandemics have or had a high fatality rate without modern microbial treatment: all killed ten million people or more, and the events are each associated with devastating cultural and environmental changes. And they all were caused by varieties of the plague bacillus Y. pestis. The light stuff in the scanning electron microscope micrograph above is a mass of Y. pestis in the gut of a flea, courtesy NIAID.

The Plagues of Y. Pestis

Primarily, Y. pestis causes disease in a wide variety of rodents, including marmots, ground squirrels, gerbils, prairie dogs, and, most famously, rats, specifically the black rat (Rattus rattus) (and almost certainly not the brown rat R. norvegicus, despite what you might have heard). The disease is believed to be transmitted from colony-dwelling rodents to unlucky humans by fleas, the species of which varies with the region infected. However, when the infection reaches the human lungs, it transforms into a pneumonic plague, and then can be transferred airborne from human to human very rapidly indeed (Caulfield et al. 2014). Variations of plague inflicted by Y. pestis include the bubonic plague, primary septicaemic plague, and primary pneumonic plague. Those more or less virulent variations were driven by genetic mutations: mutate is what diseases do, as scientists have recognized in our new 21st-century COVID-19 pandemic. 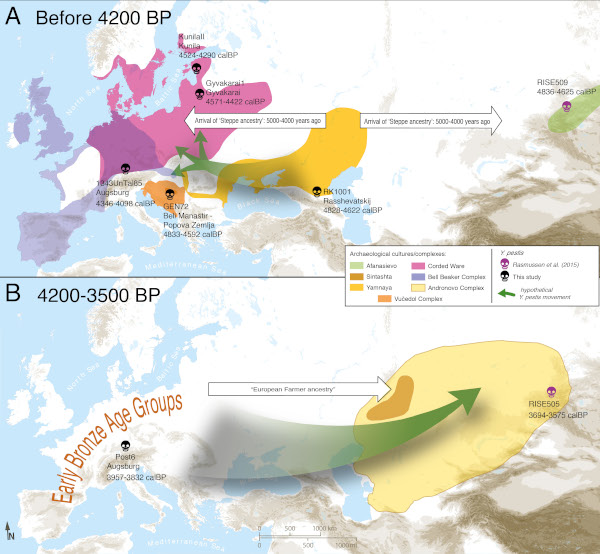 Map of proposed Yersinia pestis circulation throughout Eurasia. A) Entrance of Y. pestis into Europe from Central Eurasia with the expansion of Yamnaya pastoralists around 4,800 years ago. B) Circulation of Y. pestis to Southern Siberia from Europe. Only complete genomes are shown. Image credit: Aida Andrades Valtueña. Andrades Valtueña et al. (2017). The Stone Age Plague and its Persistence in Eurasia. Current Biology

There were earlier recorded outbreaks of disease such as the Plague of Athens (430–427 BCE) and Antonine Plague (165–180 CE), but currently, they have not been traced to Y. pestis. Although there is no written record of a plague outbreak that can be associated with Y. pestis prior to the Justinian plague, there is genetic evidence (Kılınç and colleagues 2021) that there was an outbreak in northeast Asia about 4,400 years ago, that reduced population size and genetic diversity, shortly after the second wave of people left the region to populate the Americas.

History of the Bubonic Plague

Y. pestis probably evolved in northeast Asia from its ancestor Y. pseudotuberculosis Y. pestis around 5,700–6,000 years ago. Its recently-evolved "improvements" included the acquisition of two plasmids which provide the bacterium with specialized mechanisms for more easily infiltrating mammalian hosts.

The oldest direct evidence of Y. pestis comes from several sites dated to the Bronze Age and early Iron Age in Europe and Asia. Scholars led by geneticist Eske Willerslev (Rasmussen et al. 2015) looked at DNA from 101 Bronze Age individuals from Europe and Asia and found seven who died between 2800–5000 years ago carried Y. pestis sequences. This strain did not cause bubonic plague (and was likely not transmitted by fleas), but it did cause pneumonic and septicemic plague, bad enough in their own right. Vast trading networks and migrating populations are known in Bronze Age Eurasia, and the movement of people and disease may have been responsible for suggested population declines in the late 4th and early 3rd millennium BC.

Kılınç and colleagues (2021) conducted a similar genetic study of 40 individuals who lived between 16,900 to 550 years ago in northeast Asia, and found a ~4400-year-old individual from Cis-Baikal and a ~3800-year-old individual from Yakutia, whose skeletons held DNA from Y. pestis. This study documented population variations across the region, which the researchers suggest may represent an outbreak of disease, something that will need additional study to confirm.

Yersinia pestis was named after Alexandre Yersin, one of two researchers who independently identified the organism in 1894 when the bubonic plague arose in China: the other was Japanese bacteriologist Shihbasaburo Kitasato.

The genome for Y. pestis was sequenced in 2011, allowing researchers to identify ancient DNA containing the disease. That and later refinement allowed researchers to identify various DNA signatures in ancient skeletal materials. Several studies since have found that the version of Y. pestis that brought us the Black Death is the ancestor of all modern strains. The sixth–eighth century CE Plague of Justinian also appears to have been a variant of Y. pestis, but distinct from the other plague bacteria; while the Black Death and modern plagues appear to be more closely related.

About a decade ago, a lively debate existed over whether the Justinian and Black Death plagues were indeed bubonic, but that debate has all but evaporated in the face of advanced DNA studies.

Today, the planet is facing another catastrophic pandemic. As of mid-January 2021, there have been nearly 100 million cases of COVID-19 and nearly 2 million deaths recorded. And it's increasing: we're nowhere near the end. Unlike the historic sufferers of bubonic plague, we have science on our side, including vaccines and simple methods of prevention. But many politicians in power at the time of COVID-19's discovery were and have remained in denial, poisoning the public against the science. This has been a costly error, and it can and will get worse.


This article was originally published on About.com in March 2014 as
http://archaeology.about.com/od/lterms/qt/Library-Of-Alexandria.htm
and was deprecated from ThoughtCo about March 2016. Like other articles recovered from About.com and ThoughtCo, this article has been updated and added here on WasteFlake.