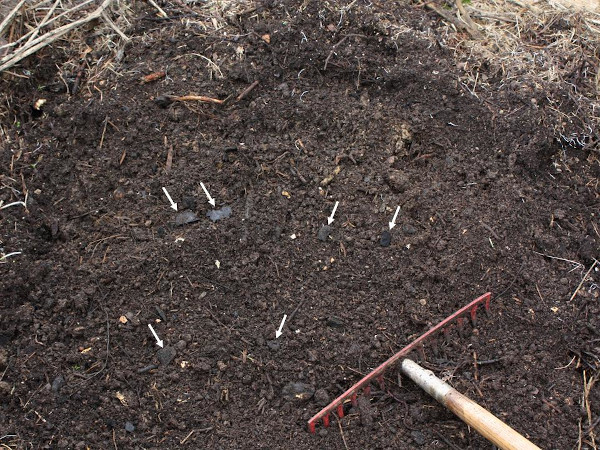 Terra preta, a fertile black compost mixture of soil and organic wastes, has been used to improve poor soils in the Amazon for at least 4,500 years. It is what scientists built the biochar concept on—one of the possible tools to fight the effects of climate change. The image above is from a homemade terra preta: wood charcoal composted together with yard waste, kitchen slops, and soil. The charcoal pieces do not decay during fermentation and can be found in the compost when it is done (white arrows). Photo credit: Holger Casselmann. https://commons.wikimedia.org/wiki/File:Terra_preta_HC1.JPG

Amazonian Dark Earths (ADE) also known as "terra preta" or "Terra Preta de Índio" ("black earth" or "black earth of the Indians" in Portuguese) refers to very dark organic-rich soils that have been documented in many areas within the Amazon rainforest of South America. A type of "super-midden", ADE is essentially a human-created A horizon, or anthrosol, built on top of existing nutrient-poor soils: think of it as a compost heap incorporating charcoal and other organic wastes. Scholars debate, to some extent, whether they are the result of deliberate construction ("anthropogenic") or merely an indirect benefit of living in villages and sharing a garbage dump ("anthropic"). It was almost certainly a little of both.

Amazonian Dark Earths are found at archaeological remains of villages in association with pottery fragments, stone flakes and animal and plant remains; they are also found at burial mounds and artificially constructed ditches or enclosures. Radiocarbon dating on charcoal found within ADE patches suggests that they were mostly created between 2,500 and 500 years ago. However, one ADE patch on the Jamari River in the Madeira basin of southeastern Amazonia has been dated to between 4,800 and 2,600 years ago. These dates matched (and were thought to represent) data concerning the first permanent agricultural and sedentary lifeways in the region. However, recent studies by Martti Pärssinen and colleagues (2020) have identified the precursors to terra preta date to at least 10,000 years ago: patches of brown soil with increased fertility known as terra mulata ("brown earth") have been found at a site called Severino Calazans in the state of Acre, Brazil.

Lucas Silva and colleagues reported in a 2021 article in the open-access journal Nature Communications that there is fairly strong evidence from a site in northern Brazil that some patches of ADE were originally formed by natural processes. Silva and colleagues found that in the near-river environments on the Solimões River, flooding of the terrace provided a layer of fresh fish biomass.

That may describe the genesis of the ADE in the floodplains: in fact, that would explain why some ADE soils are so much older than cultural formations, such as that identified at Severino Calazans, which developed enhanced soil patches as early as 10,000 years ago. Flooding of terraces in a river basin is known to have produced soil fertility around the world. That doesn't take away from the human-maintenance requirements of terra preta, however. Evidence is quite strong that indigenous people recognized the enhanced fertility of these soils and added to them after their genesis.

Despite the fact that the Amazon rainforest contains a high number and diversity of plants and animals, native soils in the Amazon are notoriously infertile, with high levels of iron and aluminum and low pH levels, all of which present an enormous limitation for horticultural activities. The only naturally fertile soils in the Amazon are in the floodplains of whitewater rivers.

Amazonian Dark Earths are patches of highly fertile soils, which were deliberately created and maintained by Precolumbian people to allow reasonable levels of crop growing. ADE soils are located on the tops of bluffs overlooking rivers and lakes throughout the Amazon, as well as on the river terraces and levees within the floodplains of the rivers.

The creation of the ADEs allowed Precolumbian people to concentrate food and other resources in areas to make it possible to rely on them. In addition, because the construction of ADE involves the ash and charcoal from earth ovens, terra preta provides a large potential for the sequestration of carbon, taking carbon out of the atmosphere and putting it to work to improve the nutrient value of soil. The addition of ash and charcoal to midden deposits to make more fertile and nutrient-rich soil is more generally called biochar, and biochar is becoming enormously important to combatting climate change and food insecurity because it sequesters carbon and preserves soil nutrients from leaking into groundwater resources.

ADE patches are not uniform in structure; in this respect, they're like an ordinary midden. At the center is a core of fertile soil, called terra preta; the core is surrounded by an area of soil that gradually fades in fertility as it extends outward. The patches range in size from one or two hectares (2.5-5 acres) to an area of more than 90 hectares (~23 acres). Some ADE patches are as much as 150 centimeters (~4 feet) thick.

Amazonian Dark Earths were created by intensive burning and nutrient deposition, and have been identified in pre-Columbian midden areas, home gardens, and outlying fields. The soils are enriched with phosphorous, calcium, manganese, magnesium, and zinc, and have increased nutrient and moisture retention. ADEs are made up of the wastes from food preparation and processing, human and animal excrement, organic housing materials, ash and charcoal from fires, and human and animal burials.

Studies by scholars such as James Fraser and colleagues (2011) and Julie Major and colleagues (2005) on the fertility of Amazonian Dark Earth found that its production and use allowed the South American people to domesticate and tend a broad diversity of nutrient-demanding crops, such as citrus and bitter manioc; and today, the soils allow modern farmers to more readily grow a variety of marketable species. The Lost Cities and ADE

In the 16th century CE, Spanish conquistador Francisco Pizarro sent two men into the Amazon searching for the fabled "city of gold". Francisco de Orellana and Friar Gaspar de Carvajal disappeared into the jungle but eventually returned, claiming that they had seen great walled cities occupied by thousands of people who grew crops. (Orellana died on a second expedition.) Several explorers went looking for El Dorado and never returned—Percy Fawcett was one famous example.

But the story of lost cities in the Amazon was disbelieved by everybody else, until the first decades of the 21st century, when researchers Michael Heckenberger and Eduardo Goes Neves discovered the descendants and the archaeological remnants of the cities: hundreds of communities created in openings in the jungle, connected by roads and scattered throughout Amazonia. Amazonian Dark Earths are what made the "Lost Cities" possible.

ADE Outside of Amazonia

Although the combination of soils, climate, and people's needs are not paralleled exactly anywhere outside of the Amazon, nutrient-rich soils which have been improved by biochar addition are also found in Europe where they're called Plaggen soils, and in the Murray River region of Australia (dated 3500–600 years ago), where scholars call it Terra Preta Australis.

Biochar has become one of the tools of climate science: its ability to renew poor soils, sequester carbon and keep soil nutrients and fertilizers from leaking into groundwater may prove critical to the survival of the people on our planet.


This article was originally published on About.com in July of 2011 as
http://archaeology.about.com/od/amthroughanterms/qt/Amazonian-Dark-Earth.htm
and was deprecated from ThoughtCo in May 2016. Like other articles recovered from About.com and ThoughtCo, this article has been updated and added here on WasteFlake.