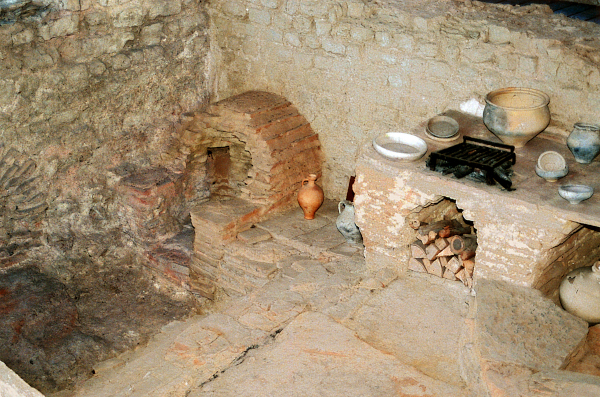 An essential element of any good road system is a place for the traveler to stop for the night. Without roadside inns, travelers would be forced to camp out, to bring their own tents, cook their own food, build their own campfires. They would have to put themselves at the mercy of wild animals and thieves in the night. That is true today, and it was true at least as long ago as 600 BCE, and probably longer.

The above image is of the cosy kitchen which fed travelers on the Roman Road at the villa of Bad Neuenahr-Ahrweiler, Germany in the 3rd century CE. Image credit: Mediatus.

The similarities of roadside houses throughout history are many. Often aligned at day-long journey intervals, roadside inns provided the traveler a place to sleep; to refresh pack animals (if any); to repair equipment; to obtain water and food; to be sheltered from inclement weather; and most essentially, to share news with other travelers. These similarities hold up, regardless of whether the traveler was on foot or on horseback or leading a camel train, whether the traveler was an Inca courier or a Roman soldier or Mesopotamian merchant, or one of the countless traders of the Silk Road. Waystations often have a defensive wall, a central plaza or courtyard, and separate quarters for elites and common folk. But it's the differences that make the study of way stations and rest houses an intriguing part of the study of ancient roads.

The oldest reported use of way station inns on a road was on the Achaemenid Royal Road in Mesopotamia. A total of 111 waystations were reported in the historical records (Herodotus, 6th century BCE) on the main branch of the Achaemenid Royal Road between the Mesopotamian towns of Susa and Sardis. The road was built by Darius the Great during his rule (521–485 BCE) of the Persian Empire, but it is certain that the road followed existing trading routes and possible that the way stations also predated Darius. Reportedly, the way stations were primarily for keeping replacements for tired horses.

Only a handful of Achaemenid way stations have been identified archaeologically—and scholars are not agreed on the identification. One strong candidate for a waystation is a large (40x30 meters) five-room stone building near the site of Kuh-e Qale; another is at the site of JinJan (Tappeh Survan), in Iran. Tangi-Bulaghi, a probable waystation sited near Pasargadae, included a courtyard surrounded by thick walls, with several smaller interior buildings. 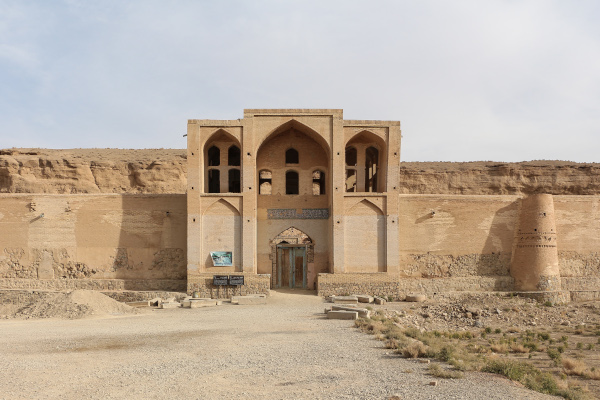 A caravanserai (sometimes spelled caravansery, plural caravanserais) is a type of roadside inn particularly (but not exclusively) located on the various network of camel trails making up the ancient Silk Road. In general, the main structure within a caravanserai was a long rectangular stone-built wall with one large gated opening. The opening had to be large enough to permit the entry of camels stacked high with tall packs and led by their very long-distance traders. The entryway opened up on a large courtyard, the corners of which included additional buildings for sleeping and other purposes, sometimes including a mosque.

Caravanserais were constructed at least as early as the first or second centuries BCE, and perhaps earlier, and many were used intermittently or continuously up through the Middle Ages. The longevity of these sites attests to the importance of way stations along such a large and important communication and trade network. Caravanserais varied widely in architecture and amenities depending on the local climate and requirements of the travelers.

In addition to sleeping facilities, a caravanserai provided water and supplies for travelers on the Silk Road. There was generally a market where travelers could trade goods for needed road supplies; and fodder and water for the camels. 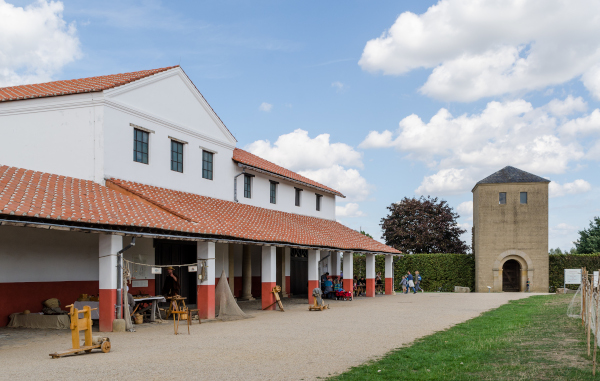 The Imperial Roman form of a roadside inn was called a mansio. These were dotted along the Roman roads throughout the Roman Empire, and they were designated as places where official travelers including couriers could sleep, change horses and bathe. Often mansios had two classes of rooms: one for the ordinary traveler, and a fancier one for the Imperial traveler. Some mansios had adjacent blacksmiths and other workshops, bathhouses, granaries and other storehouses, and markets. For the most part, mansios were built outside of the defenses of the town, clearly providing access to travelers and at the same time maintaining protection for the local inhabitants by keeping those travelers outside. Archaeologists have reported that sadly for us, the elite rooms of the mansios were swept clean for visitors.

The mansio at Catterick, a second-century CE Roman town in Yorkshire, covered nearly half a hectare (1.2 acres) and consisted of two main groups of rooms behind a wide veranda. A small internal courtyard held an ornamental fountain and a bathhouse. Each group of rooms had its own water supply, as did the adjacent bathhouse. Most of the floors were concrete, and the walls were covered in painted plaster. It had a portico doorway with columns, and the mansio was located close to the river's edge, probably near the bridge. The bathhouse was pretty fancy, with three heated rooms, a hot bath, a cold room and a large plunge bath, a changing room, and a small square sweating room.

Recent research at Chelmsford, a small rural town on the road between Colchester and London during the early second century BCE, revealed that the local innkeepers took special pains to make sure that traveling imperial visitors felt at home. The types of pottery used at the mansio were similar to the kinds of pottery discovered at urban Roman sites like Colchester: Samian vessels, moratoria, flagons, and olive oil amphorae, including a high percentage of imported wares. In comparison, the kind of pots found at the local temple had a much higher frequency of locally-made Romano-British pottery, most notably when comparing jar forms and dining vessels. Excavator Martin Pitts believes the high percentage of imports was because the landlords wanted to make their elite visitors feel at home. 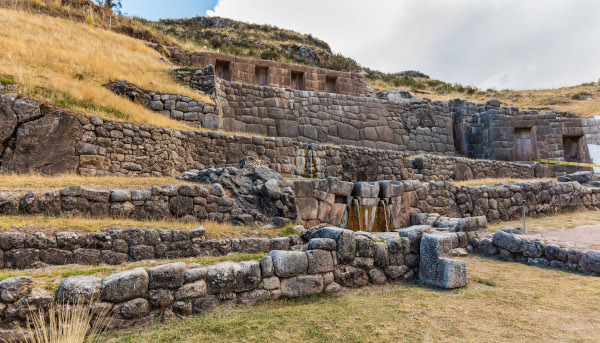 Way stations within the vast Inca road system of the 14th and 15th centuries CE were called tampu, and like the other types of way stations, they were placed on the route at a day's journey apart. Although they vary in detail, they usually included a large courtyard (a.k.a. plaza) flanked by buildings. A small platform near the center of the plaza, and storage facilities called colca might be located on adjacent hillsides. Generally, the housing included an elite section. Ceramics found at tampu are generally local vessels made to Inca specifications.

Tampu were important resting locations for couriers who relayed information concerning the far-flung Inca Empire back to the kings in Cuzco, as well as Inca traders who transported goods and services via alpaca and llama and on foot. Tampu also acted as post stations, so that local leaders could regularly communicate with Cuzco.

Some of the tampu include a building known as a kalanka, which some scholars interpret as a barracks. Such structures are rectangular, built of high quality pirka masonry. An example of a 'kalanka' at the site of Huanaco Viejo measures 11 m wide by 71 meters (36x232 ft) long, with nine separate doorways opening onto the adjacent plaza and eight windows on the opposite wall. Excavations indicated that at least seven central posts supported the roof. The beautiful Tambomachay waystation had a fountain, which still flows at the site today.

Other Way Stations of Note

Way stations are rarely the sole focus of an archaeological investigation, but reports turn up in studies of many different emigration systems such as the Mormon Trek, trade networks such as the Nabataean Incense Road, and pilgrimage routes such as the Cusco ceque system and Chaco Canyon.


This article was originally published on About.com in May 2012, as
and was deprecated from ThoughtCo in October 2017. Like other articles recovered from About.com and ThoughtCo, this article has been updated and added here on WasteFlake.